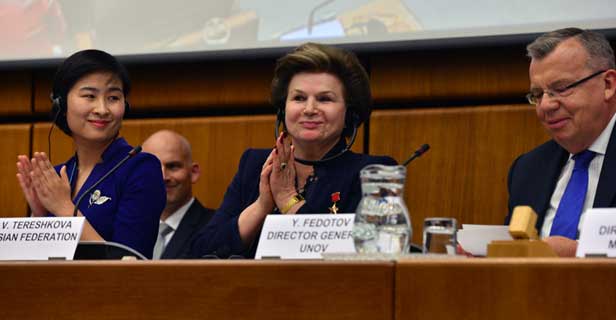 50th Anniversary of Women in Space

"I would go to Mars, even if there was no return flight, why not, this is my profession. There is so much work there." At the age of 76, Valentina Tereshkova has lost none of her energy and dedication to space travel. Many eagerly awaited her appearance as part of the celebrations of 50 Years of Women in Space this week at the Vienna International Centre. And they were not disappointed.

"Hello, where are you Martian people," is what Tereshkova would shout if she were ever to land on Mars, giggling and swiftly adding that she did not consider this to be a realistic plan.

Valentina Tereshkova made her historic space flight as the first woman in outer space on 16 June 1963. The 2013 session of Committee on the Peaceful Uses of Outer Space (COPUOS) taking place this week marks the fiftieth anniversary of cosmonaut Tereshkova's historic space flight, using this unique opportunity to commemorate it from the perspective of women pioneers in advanced space and scientific endeavours.

At the opening session of the Committee, the Director-General of the United Nations Office at Vienna Yury Fedotov recognized the value of women space explorers for future generations: "Space science and technology have made important contributions to areas as diverse as health and disaster management to climate change mitigation and development. The discussion here today makes clear that the peaceful and beneficial use of space relies not only on cooperation between states, but the equal participation of women and men."

Fifty years ago this week cosmonaut Valentina Tereshkova was launched aboard the space shuttle Vostok 6, orbiting the earth 48 times, and in the course of that historic 70-hour flight became the first woman in space.

The current crew of the International Space Station congratulated her in a video message for her historic achievement: "Much has been accomplished in the fifty years since that first, pioneering flight. Nearly 60 women have followed cosmonaut Tereshkova and gone to space. It is very exciting to celebrate with you - at a distance - the 50 Years of Women in Space, and on this occasion pay tribute to all the astronauts and cosmonauts, the inspiring women and men who continue exploring new frontiers, bringing the benefits of space exploration to humanity."

"A bird cannot fly with one wing only. Human space flight cannot develop any further without the active participation of women," Valentina Tereshkova said, encouraging more women to take part in space programmes.

The public can participate in the celebrations by visiting the Vienna International Centre for a space tour including a chance to see an exhibit on Women in Space and to preview the space stamps soon to be issued by the United Nations Postal Administration, or by meeting the women space pioneers at the public panel in the Natural History Museum.