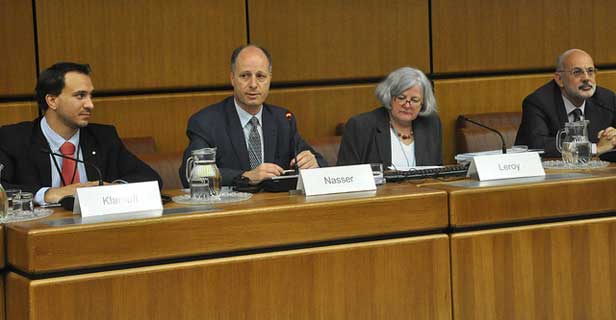 Around 100 students from 36 different countries - all organisers of Model UNs in their respective countries -- gathered in Vienna to deepend their understanding of the real dynamics in the UN and in this manner to assist them in improving the organization of Model UN conferences all over the world. This year the focus topic was the relationship between the General Assembly and the UN Secretariat.

The Workshop was opened by the, Director of Outreach Division of the Department of Public Information Maher Nasser, as well as UNIS Director Janos Tisovszky and the Vice-President of the United Nations Youth and Student Association of Austria Michael Klampfl. In their opening speeches they congratulated the students for their hard work and encouraged them to continue organising Model UN conferences with the same passion in the future.

Moreover, UNDPI staff prepared videos with other UN speakers, who did not have the chance to attend the workshop as well as an online Model UN guidebook and manuals for UN Delegates, which were distributed to the participants. Various other information materials were also available online. Moreover, UNIS Vienna conducted a career workshop as a side-event for interested participants.

The four-day long UN Model Workshop was marked by heated discussions among the participants, who shared their ideas, concerns and advice on how to improve Model UN conferences. Passionate about what they were doing, they left the workshop excited and motivated: "I learned a lot during this workshop. Even though at the beginning it was difficult for me to accept critical comments about the Model UN in my country, I realized this is the fastest way to improve. The UN is a very dynamic organisation and it is developing rapidly. Model UN conferences have to keep up with the changes in the UN. I am really glad I met so many people, who are as passionate about Model UNs as I am," said one of the participants.

"Our main purpose is not to impose our view, but to give the students a chance to gather understanding of UN and to assist them in organising Model UN in their own countries. Model UN is one of the best educational tools concerning the structure and work of the UN," stressed one of the organisers, Nathalie Leroy as she also expressed her satisfaction with this year's Model UN workshop.

Model United Nations Workshops give participants the possibility to gain firsthand experience and knowledge concerning the structure of the UN and the procedures it follows. Furthermore, they offer extraordinary opportunities for the students to speak with professionals at the UN, ask them for advice and share their concerns and difficulties. In addition,, participants have the unique possibility to meet other Model UN organisers from all over the world and exchange ideas with them.