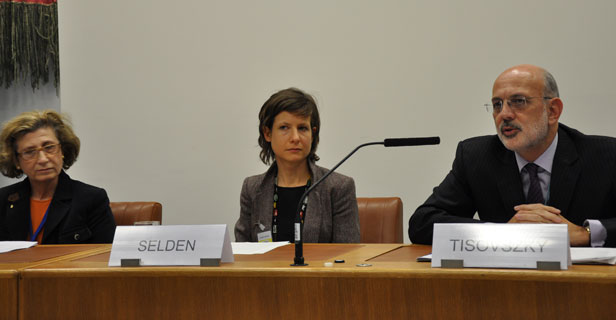 Members of the Vienna NGO Committee on the Status of Women, as well as representatives of non-governmental and governmental organizations and UN staff met on 4 March 2013 at the Vienna International Centre (VIC) to discuss the current status of women and follow the opening of the 57th session of the Commission on the Status of Women streamed live from UN Headquarters.

The meeting hosted by the United Nations Information Service (UNIS) Vienna was organized to mark International Women's Day 2013 which is annually commemorated on 8 March. The theme of this year's observance, "A promise is a promise: Time for action to end violence against women" seeks to strengthen international community's commitment to put an end to violence against women.

UNIS Vienna Director Janos Tisovszky, who opened the meeting, welcomed the participants and referred to the importance of the long-standing partnership of the United Nations with NGOs and the civil society. Women's issues in particular had for a long time been in the centre of that partnership. He noted that working for and working with women was one of the five declared priorities of United Nations Secretary-General Ban Ki-moon for his second term. Within that, "elimination and prevention of all forms of violence against women and girls" -- the theme of the 57 th session of the Commission on the Status of Women (CSW) -- had a special importance.

Part of the UN effort to fight violence against women was the UN Secretary-General's UNiTE campaign which called on all governments, civil society, women's organizations, men, young people, the private sector, the media and the entire UN system to join forces in addressing this global pandemic.

Vienna NGO Committee on the Status of Women Vice-chair Dora Vrdlovec emphasized the role of the Commission as the main global policy-making entity to protect the rights of women. "The main task of this organ", she said, "is to deliver the information for the governments that the violence against women must end".

Barbara Selden from the Austrian Ministry for Women and Civil Service, Department for Socio-economic Equality, International and EU Affairs, referred to the Ministry's work in the field of prevention of violence against women, which currently included the preparation of a document dealing with aspects such as the strengthening of protection policy and the assessment of risk factors.

The speeches were followed by a Q&A session and the livestream of the opening of the session from UN Headquarters in New York. Further information on the 57 th CSW session, held from 4 to 15 March 2013.

The Vienna NGO Committee on the Status of Women accredited at the United Nations Office in Vienna was founded in 1982 and works on a voluntary basis on the national and international level. The committee is comprised of 40 international organizations with a focus on women's issues. The Committee's main purpose is to facilitate the activities of its member organizations in promoting gender equality and the empowerment of women both among these member organizations and in relation to the UN Division for the Advancement of Women. Further information.