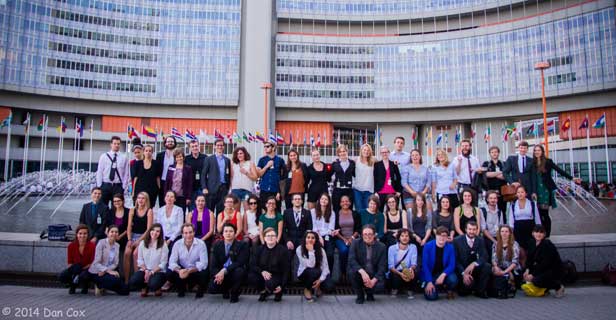 Early in the morning on 13 June, over 60 students from the University of Vienna arrived at the entrance of the Vienna International Centre to start their day as 'delegates' participating in the simulation of a UN General Assembly session. The Model United Nations was hosted by the United Nations Information Service (UNIS Vienna) and organized by the University of Vienna, to give students an opportunity to experience negotiating a UN resolution in a realistic setting.

After the students took their seats in the conference room, the session was opened by Antonia Seilern, Associate Expert at UNIS Vienna, on this year's topic 'Food Security and Food Sovereignty - a global responsibility'. She pointed out that food security is a major global challenge which the world needs to work together on, to find solutions, a scenario in which the United Nations can provide a platform for collaboration and discussion.

Then the students practised their debating and diplomatic skills while representing their respective Member State in multilateral negotiations and in small committees. During the plenary discussions, draft resolutions were presented and delegates emphasized their key points on the different subjects. Topics touched upon free trade, genetic engineering, sustainable agriculture as well as human rights and land-grabbing. The motivated students took their roles very seriously showing great talent while speaking up for their adopted nation and putting themselves in positions different from their own. Their commitment was reflected in the beautiful decoration of the tables which was done with much attention to detail and included food and drinks from the country, flags and photos and some wore traditional garments such as head-scarfs, flower necklaces or a sarong.

After a long day of negotiations and voting, the students concluded the session slightly exhausted but richer in diplomatic know-how. "I did not realize how long and difficult those negotiations could get," one of the students said, "I now have a much better understanding of the process which leads to the birth of a new resolution." They found that reaching common ground can be tough, but is possible nevertheless. To face today's challenges, cooperation is more important than ever and the Model United Nations is a great way of preparing the next generation for building a better future.