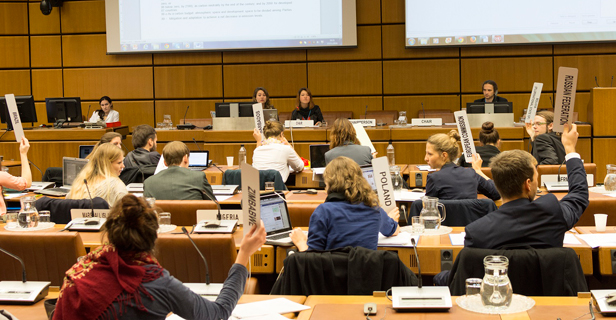 On 17 and 18 November 2014 30 students were simulating the UN climate negotiations at the UN premises in Vienna. The participants had prepared the positions of their countries with great personal commitment, during two concentrated preparation meetings in the summer.

The aim of the project is to simulate the UN climate conference in the most realistic way possible.  Therefore, the students discussed the original negotiation text. In doing so they switched between plenary and bilateral sessions. The whole simulation was translated simultaneously into German and English. Experts from the Ministry supported the participants during their negotiations and gave them feedback at the end of each day.

The simulation showed not only the participants but also the 100 or so visitors the enormous potential of the climate conference. Moreover, the most fundamental of democratic principles came to bear here, namely reaching a compromise from a great variety of positions. The decision-making had to be by consensus. "Now I can understand why the wording in the negotiation text is so important and why the negotiations often take a long time. But I also learned that getting in contact with each other, listening and trying to find solutions are essential,"  said one of the participants after the simulation.

Sometimes during the simulation the students felt frustrated but at the end of it they had gained a great deal of knowledge and awareness of the negotiating process and, last but not least, a great sense of delight to have taken part in it.

More information about the project: www.jugendumwelt.at/unklimareporterin