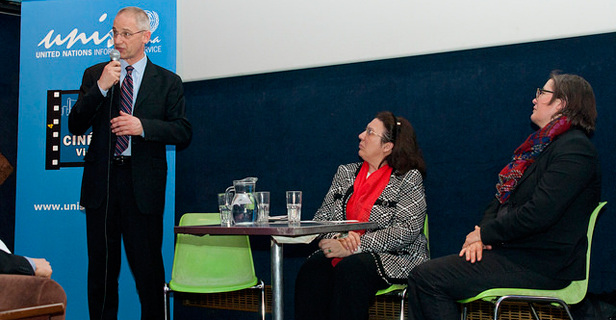 In memory of the victims of the Holocaust: Cine-ONU Screening of "May your memory be love - The story of Ovadia Baruch"

"The mission of the United Nations was shaped by the tragedy of the Second World War and the Holocaust. We are committed to protect the vulnerable, promote fundamental human rights and uphold the freedom, dignity and worth of every person." With this statement, United Nation's Secretary-General Ban Ki-moon made an appeal to the world on the occasion of International Day of Commemoration in Memory of the Victims of the Holocaust, observed each year on 27 January. On this day, seventy years ago, the concentration and extermination camp Auschwitz-Birkenau was liberated. With the theme of this year's commemoration  "Liberty, life and the legacy of the Holocaust Survivors", the United Nations Information Service (UNIS) Vienna in cooperation with the Permanent Mission of Israel to the UN (Vienna) screened the documentary "May your memory be love - The story of Ovadia Baruch" on 26 January as part of the monthly Cine ONU Vienna film series.

The film  tells the story of a young Greek Jew from Thessaloniki,  Ovadia Baruch, who was deported to Auschwitz-Birkenau together with his family, but managed to survive despite inhumane conditions. The love story of Ovadia Baruch and a young Jewish woman, Aliza Tsafari, that started in the concentration camp and developed into a life-long relationship, affirms the victory of humanity over the horrors of the Holocaust.

The panel discussion that followed the film, featured distinguished guests -Chryssoula Aliferi, the Ambassador of Greece to the United Nations (Vienna) and Heidemarie Uhl, Historian and Senior Researcher at the Institute of Culture Studies and Theatre History of the Austrian Academy of Sciences.

"The day when we pay tribute to the victims of the Holocaust shows us the victory of life, love and humanity over the dark side of humankind," said Ambassador Aliferi at the beginning of the panel discussion. She stressed that during the World War II, Greece lost around ten  per cent of its population, and almost the whole Jewish community perished in Thessaloniki. The city was a target for the Nazi regime because of its cosmopolitan population and the large Jewish community. Nowadays, there is a true renaissance of the Jewish life in Thessaloniki: schools have reopened, books published, people do research about the Holocaust and speak about it to the world. "We encourage young people to do the research and we organize regular school trips to Auschwitz-Birkenau," added Ambassador Aliferi.

Heidemarie Uhl raised an important question: how can we avoid museums and Holocaust remembrance initiatives getting dusty and forgotten? How can we pass on the memory of the Holocaust victims to the next  generation ?

"We need the real-life stories of the Holocaust survivors, not the numbers. These people and places can give you an emotional experience through their personal stories. We have to give it a vivid memory, " she said to keep the memory of the Holocaust victims alive.

She also stressed: "We cannot solve social problems without education, we always have to remember what peace, democracy and civil rights mean, why the European Union was built and why the United Nations came into existence."

The film "May your memory be love - The story of Ovadia Baruch" is part of the "Witnesses and Education" joint project of the International School for Holocaust studies and the Multimedia Centre of the Hebrew University of Jerusalem.  For the project, survivors have been telling their life stories before, during and after the Holocaust, at the places where the events actually took place.