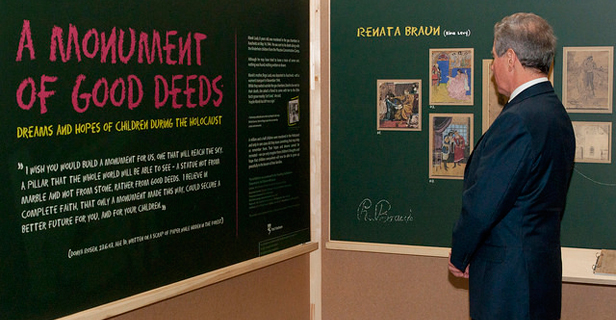 The ceremony, moderated by UNIS Director Martin Nesirky, was opened by Chief Rabbi Paul Chaim Eisenberg, who  recited the Kaddish, the mourners' prayer.

The Director-General of the United Nations Office at Vienna (UNOV), Yury Fedotov, delivered the message of UN Secretary-General Ban Ki-moon on the occasion of the Holocaust Remembrance Day and called on the guests to honour the victims of Holocaust and to be inspired by their life stories.

"On the 70 th  anniversary of the founding of the United Nations, it is my sincere hope that our community of nations will remain united in the pursuit of peace, tolerance, and dignity for all," said Ambassador Zvi Heifetz, the Permanent Representative of Israel to the United Nations (Vienna),  at the commemorative ceremony.

As part of the ceremony, Ambassador Heifetz handed over a certificate of appreciation to Cheng Jingye, Permanent Representative of the People's Republic of China to the United Nations (Vienna), honouring Feng-Shan Ho, Chinese Consul-General in Vienna in the years leading to the Holocaust, who saved many Jewish families by issuing visas to escape the country, and was recently awarded the title "Righteous among the Nations". In his speech, Ambassador Cheng mentioned that the Chinese people will never forget the humanitarian spirit of those helping Jewish families and the Holocaust survivors.

Another certificate of appreciation was presented to Ambassador Gonzalo De Salazar Serantes, the Permanent Representative of Spain to the United Nations (Vienna). The plaque honoured the courageous actions of Sebastian de Romero Radigales, who arrived in Athens as the Consul-General of Spain in 1943 and issued unconditional Spanish citizenship to hundreds of Salonika Jews, therefore saving them from deportation and ensuring their safe travel to Spain. Ambassador De Salazar Serantes expressed his gratitude and underlined that the actions of Sebastian de Romero Radigales symbolize the commitment of Spain in protecting human rights, and also said: "It's our moral obligation to transmit the Holocaust remembrance to generations".

The vocal ensemble of the Yehuda Halevi Music School performed the symbolic songs "Donna Donna" and "Reyzele". Written by the Jewish artists Aaron Zeitlin (text) and Sholom Secunda (melody) in 1940/41, "Donna Donna" is a Yiddish theater song about a calf being led to slaughter. The song reflects the situation of the Jewish people during the Third Reich and is of  great importance to the Jewish community.  The other song, "Reyzele", expresses a young man's love for his "Reyzele" as well as the heart and soul of the Jewish people. The song was written by a famous Jewish poet Gebirtig Mordkhe, who was born in Kraków, Poland, and during the war sent to the ghetto on the outskirts of the city. On 4 June 1942, while being marched to the Kraków train station on the way to the Bełżec death camp, Gebirtig was murdered by random Nazi fire.

The exhibition "A Monument of Good Deeds" is dedicated to the children who perished in the Holocaust and their legacies. The stories enable us to remember those children and their fate. The design of the exhibition evokes an empty classroom and each board encapsulates the child's life before, during and after the Holocaust. Interactive elements help the visitors to better visualize and understand the tragedies each victim experienced and endured.

More information on the exhibition is available through the following link: http://www.designmill.co.il/en/projects/Documentation/91