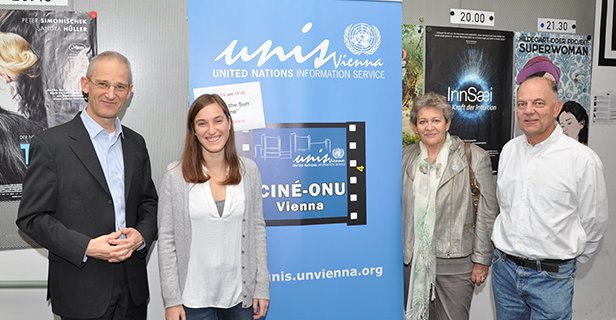 "The Barefoot College is a magical place", remembers Chiara Andrich, Co-director of the documentary "Bring the sun home". Ciné-ONU Vienna presented the eye-opening and heart-warming documentary about access to sustainable energy and women's empowerment on 24 October to mark the International Day of Rural Women and United Nations Day.

Commissioned to document the work of the Barefoot Collage, the 2012 winners of the Sole Luna Documentary Film Festival, Giovanni Pellegrini and Chiara Andrich, portray the story of two illiterate women from a village with no light in El Salvador. For six months they left their homes and families to fly to Tilonia, a village in India so they could learn how to install, repair and maintain solar photovoltaic panels.

Since 1972 the Barefoot College has been working to improve the quality of life of the rural poor. Its efforts focus on basic needs: water, health, education, energy, environmental regeneration and gainful employment, building on existing skills. The college especially empowers older women, grandmothers or widows who are often illiterate, to perform engineering tasks traditionally reserved for men. The idea behind it is that older women are more likely to share the skills and information in their communities because they are rooted there and are less likely to leave to seek better opportunities elsewhere.

The screening of "Bring the sun home" was followed by a discussion with the Co-director Chiara Andrich, Lilly Sucharipa, President of the National Committee for UN Women in Austria, and Peter Baumann, Co-founder of Engineers without Borders in Austria. The Director of the United Nations Information Service (UNIS) Vienna, Martin Nesirky, moderated the discussion.

Chiara Andrich spoke about the making of the film and the challenges the women faced when they first arrived: "In the beginning it was shocking for them, because they didn't understand each other, but they learned quickly." During the whole filming they were a small team of just three people. This was helpful because, "in India and Peru people forgot about the cameras completely," she said. It was a very natural filming experience for them.

Lilly Sucharipa was very impressed by the project and how women from different backgrounds and with not much school education return home with this knowledge. "Of course sometimes problems arise when women get empowered and the men feel left behind. In our work with UN Women we see that often in refugee camps. But still for most of the women it brings advantages," she explained.

Peter Baumann emphasised that the importance of training people locally to maintain the knowledge and give them a feeling of ownership of the project: "When we turn on the lights the project is not over. The real work of technology transfer only begins then."

The Vienna screening was organised by the United Nations Information Service (UNIS) Vienna in cooperation with the Permanent Mission of Italy to the United Nations (Vienna), the National Committee for UN Women in Austria, This Human World (THW) Film Festival and Topkino.

Interview with Chiara Andrich, Co-director of the documentary "Bring the sun home"

Interview with Bunker Roy, founder of the Barefoot College

Find out more about the work of UN Women