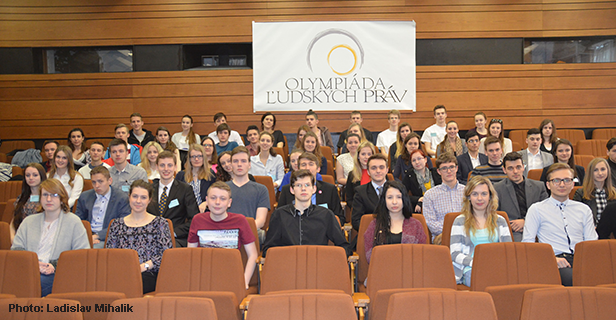 Human dignity in the eyes of Slovak secondary school students

Secondary school students from across Slovakia competed in the 6-8 April 2016 final of the country's Human Rights Olympics (HRO), an innovative event now in its 18 th year, and they put strong emphasis on the compelling global need for human dignity.

Held in Modra-Harmónia, about 45 minutes from Bratislava, the HRO brought together 62 finalists, accompanied by their teachers, 16 members of four juries, eight regional coordinators, dozens of  guests and experts and many  volunteers. It was the culmination of a contest embraced by 300 schools across Slovakia.

As a long-term cooperation partner, UNIS Vienna again supported  this year Slovakia´s flagship human rights activity which was held under the main theme of "human dignity". In his keynote speech at the opening ceremony, Martin Nesirky, Director of UNIS Vienna, said that "human dignity is both timely and timeless. Timeless in the sense that human dignity is prominently enshrined in the United Nations Charter and the Universal Declaration of Human Rights. And timely because so many of the challenges we face today, in 2016, require us to work even harder to promote human dignity."

To qualify for the final state-wide round, the participants had to win first in their regions and were then invited to write a reflection essay, using one of the themes offered by the different HRO partners. UNIS Vienna offered this year a theme that is a statement by United Nations Secretary-General Ban Ki-moon: "Migration is an expression of the human aspiration for dignity, safety and a better future." Twenty-one students wrote on the UNIS theme. "It is inspiring to see so many young people who are motivated to promote human rights and human dignity. The world, and Europe, needs more people like you to champion this cause," said  Nesirky. UNIS Vienna's Slovakia consultant, Jana Honschova, awarded token prizes to three of those students, including an invitation to visit the  United Nations in Vienna for the first prize winner.

The Human Rights Olympics is a competition for secondary school students aged 15 to19, organized by the state-wide commission of the Human Rights Olympics, held under the auspices of the Ministry of Education, Science, Research and Sport of the Slovak Republic, in cooperation with several partners including UNIS Vienna.

While in Slovakia, the UNIS Vienna Director also gave a lecture to students and other guests at the Economic University of Bratislava on the topic "Transforming our world: United Nations in 2016".

More than 30 students, including  young guests from the Gymnazium Jura Hronca high school and students from the Faculty of Commerce of the University of Economics, attended the presentation and asked questions on subjects such as migration. Nesirky outlined the role and the objectives of the United Nations and explained its priorities this year, including implementing the Sustainable Development Goals. The guest lecture was organized by Slovakia´s United Nations Association (UNA) in cooperation with UNIS Vienna. 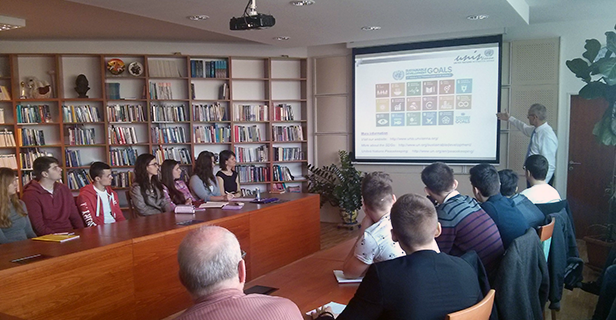