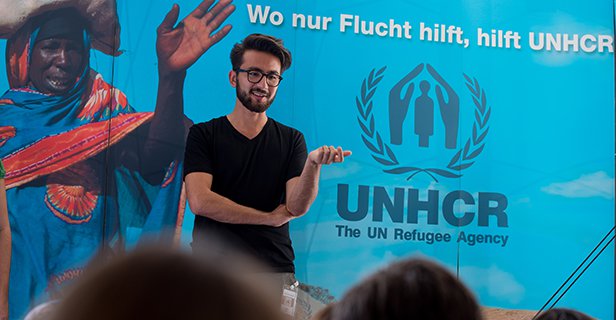 On a sunny late September morning, a young man in jeans and glasses, gives a friendly smile to a group of young Austrian students. He looks no different to you and me, but no one knows what terrible things he has experienced during his one-year refugee flight. Murtaza, a 23 year old refugee from Afghanistan, left because of political persecution he faced as a journalist. Now he is a student at the University of Vienna. Today they are listening to his story.

Before he left he told his mum: "I thought it would be an easy trip, but I didn't know what was waiting for me."

He spent a long time packed in a van "like sardines" with no room to move. "I even don't even want to remember," he said. During his journey he lost most of his luggage as well as his innocence about the world. "Now I know how naive I was at the beginning of the journey," he explained.

The young audience listened with astonishment at his experience, paying attention to his every word. One girl said that she could not even begin to imagine how someone could survive what he had been through.

After one year, he finally arrived in Vienna, expecting to start afresh, but what followed was depression, a feeling he had nothing, not even any friends. He said: "I lost my home, I am an outsider here. I remember I stood in Mariahilfer Straße, with people endlessly flowing past me, but they were in a parallel world to me."

Now he has spent a year and a half in Vienna and adapted to his new life, "I like it here, it is my home now, I have more confidence, I like its multicultural ambience, and I really have a chance to have my own life."

Asked what he felt his identity was now, he said he was a human being who did not care about nationality. He was studying political science at university but hated politics. The students all laughed at that.

As the students were leaving, one of the teenagers was asked if they had changed their impression of refugees after being on the tour and meeting Murtaza. He said he had not: "I like them as I always liked them before."

"What sport do you like?" asked another boy. "Oh, football," answered Murtaza, "Really! I like football too, we play every week, would you come and play with us?" At first Murtaza hesitated, "Thank you, but you know, I am very shy." The Austrian boy tried again, then the Afghan said, "Ok, I will come." The two young men were both so excited about the playing together.

That is just one story from the "Long day of flight" event organised by the UN Refugee Agency (UNHCR) and the Visitors Service of UNIS Vienna at the Vienna International Centre. Several different high school classes came to the UN in Vienna and learnt about the real life of refugees and what we can do to help them. This is the fifth year of the event and the first time the students have had a chance to meet and talk to a refugee which was very positively received by the teachers and students.