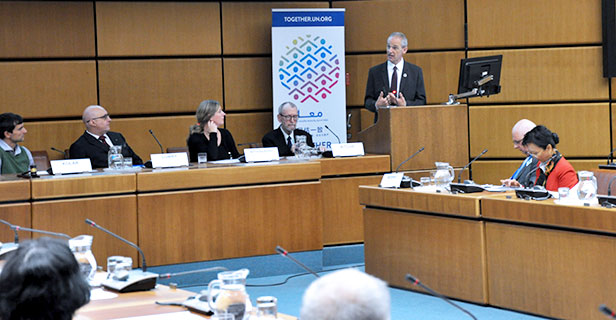 "Diversity unites! Governments and Non-Governmental Organizations: Together against radicalization" and 70 th anniversary CoNGO

VIENNA,12 October 2017 - The Conference of Non-Governmental Organizations (NGOs) in Consultative Relationship with the United Nations (CoNGO)  and the United Nations Information Service (UNIS) Vienna held an event entitled "Diversity unites! Governments and NGOs: Together against radicalization" at the Vienna International Centre (VIC) on 12 October 2017. The event was organized under the umbrella of the UN TOGETHER campaign, which aims to counter the rise in xenophobia and discrimination and promotes respect safety and dignity for refugees and migrants.

The speakers at the event included Joe Lowry, Spokesperson, International Organization for Migration (IOM) Regional Office in Vienna, who presented the "I am a migrant" campaign; there was a video message from Austrian Secretary of State for Diversity, Public Service and Digitization Muna Duzdar; a presentation about successful refugee settlement in Iceland by Senior Advisor on Refugee Issues at the Ministry of Welfare of Iceland, Linda Rós Alfreðsdóttir; and Margaret Clark of Soroptimist International Great Britain & Ireland giving insights into coping with radicalization on the ground.

The Vice President of CoNGO Vienna, Wolfgang Beiglböck, gave the opening remarks. Hannes Kolar Head of Psychological Services at the City of Vienna and Samuel Antunes Director of Mental Health Promotion, Ordem Dos Psicologicos spoke about trauma education for young people, and the psychological aspects of refugee integration. Jaafar Bambouk Ambassador of the Austrian Integration Fund who came to Austria as a refugee himself, gave some insights into his life here and the support he received which helped him to get the general qualification for university entrance.

UNIS Vienna Director Martin Nesirky thanked the Conference of NGOs for the great work to bring civil society, the UN family, governments and others together to tackle radicalization.

"The Conference of Non-Governmental Organizations in Consultative Relationship with the United Nations is a long title. But it boils down to one word, and I don't mean CoNGO. That word is partnership, now one of our 17 Sustainable Development Goals. Your colleagues all those years ago had the vision to work on partnership long before the Goals came into view. You continue that proud tradition, and we value our partnership immensely," Mr. Nesirky said.

The event ended with remarks by CoNGO President Cyril Ritchie.

Following interesting discussions and insights into the phenomenon of radicalization, CoNGO kicked off the first of three celebrations to mark its 70 th anniversary. The Vienna event titled "Challenges today and tomorrow: Civil society/UN partnerships for sustainable development. The inclusion and democratic participation of civil society throughout the 2030 Agenda" will be followed by celebratory events in Geneva and New York in 2017 and 2018.

The speakers highlighted the importance of working together to achieve the Sustainable Development Goals (SDGs) and the 2030 Agenda.

Assistant Secretary-General for Policy Coordination and Inter-Agency Affairs in the Department of Economic and Social Affaris Thomas Gass emphasized that to achieve the SDGs, "a new generation of partnerships need to emerge, among all the relevant actors, public and private. Trust needs to be strengthened and synergies created. Even within civil society."

The Director of the Division for Policy Analysis and Public Affairs at the UN Office on Drugs and Crime, Jean Luc Lemahieu, also spoke at the event.

CoNGO President Cyril Ritchie gave an optimistic outlook in his closing statement and wished for 70 more years of cooperative partnership.

All speakers highlighted both the spirit of the conference and the important milestone reached through the years of partnership.

A clarinet trio from the Association of Women Musicians of Vienna provided the musical framework for the spirited 70 th anniversary celebration. A reception supported by the City of Vienna concluded the event. 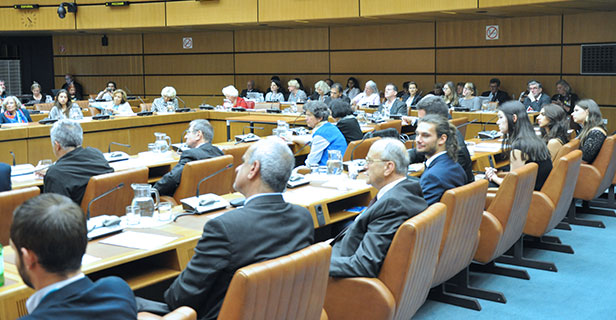