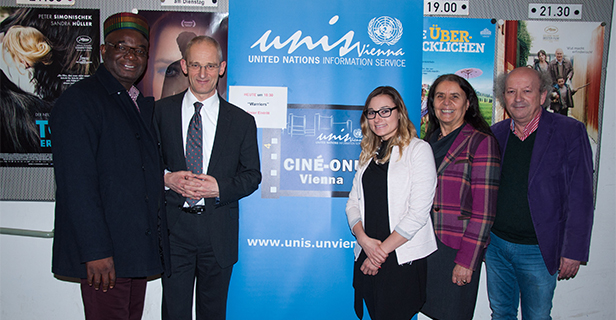 VIENNA, 6 February 2017 -"On this Day of Zero Tolerance, let us build on positive momentum and commit to intensifying global action against this heinous human rights violation for the sake of all affected women and girls, their communities, and our common future," said theUnited Nations Secretary-General António Guterres in his message for the day.

Globally, it is estimated that at least 200 million girls and women alive today have been a victim of some form of Female Genital Mutilation (FGM). As the Secretary-General said, this practice denies women and girls their dignity and endangers their health.

On the occasion of the International Day of Zero Tolerance for Female Genital Mutilation (6 February), Ciné-ONU Vienna screened the documentary 'Warriors' by Barney Douglas. The film gives an insight on FGM and offers an uplifting look at the communicative power of sport for promoting change in the region.

Warriors follows a group of courageous young Maasai men in a remote region of Kenya, who have formed a cricket team. Questioning traditional practices within their own culture and prepared to challenge the elders of the community, the Maasai warriors cricket team use their newly discovered platform to speak out in support of women and girls in the community, taking a stand against the antiquated and harmful cultural practice of female genital mutilation.

"We now realize FGM is one of the practices we should not have in our society. It's not helping us but affecting our girls and mothers and wives," says Sonyanga Ole Ngais, one of the Warriors in the film.

Mr. Bitugu, an expert in the field of sports for development and peace, emphasized the unique nature of sport and its potential to bring about change: "The power of sport is the bottom-up approach as the young Warriors of the Kenyan community Laikipia have shown by building a bridge to the cause of FGM through dialogue and inclusiveness."

"Sport is a reflection of what happens in society," said Franziska Temper, from the National Committee for UN Women, Austria. It can be a platform to campaign for women's rights and therefore be a good tool for development. UN Women offers a safe environment for empowering of women and girls by supporting projects around the world.

Sharing insights from her study on FGM in Ethiopia, Ms. Granditspointed outthat sustainable development demands full human rights for all women and girls and that can only be achieved by their participation. "Women have to take their rights to get a decent life," she added.

There is a worrying correlation between high illiteracy rates and the high number of FGM victims in Africa, so the representative of the Desert Flower Foundation Mr. Lutschinger pointed out that raising awareness through education has to be a priority to stop this harmful practice. He left the audience hopeful for the possibility of eradicating FGM within the next generation:  "Change is possible, and is already happening, especially with young people. Through access to the Internet, the younger generation has information the elders didn't have."

The Vienna screening was organized by the United Nations Information Service (UNIS) Vienna in cooperation with fairplay-VIDC and Südwind within the project "Our Game - Unser Spiel für Menschenrechte", the National Committee for UN Women, Austria, this human world (THW) Film Festival and Topkino. 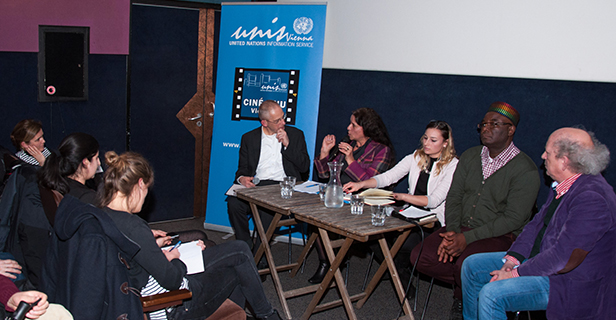