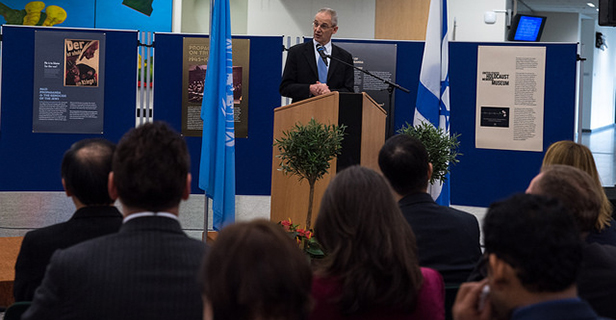 Remembering the Holocaust: educating for a better future

VIENNA, 27 January 2017 - Over 200 UN staff members and representatives from Permanent Missions, local authorities and civil society took part in a ceremony to mark the International Day of Commemoration in Memory of the Victims of the Holocaust at the Vienna International Centre on 27 January.

In his opening remarks the Director-General of the United Nations Office at Vienna (UNOV), Yury Fedotov, said that "we can never allow anti-Semitism or hatred, racism or intolerance to divide us or divert us from the path of justice." Mr. Fedotov also delivered the message of the UN Secretary-General António Guterres who pledged to honour the victims of the Holocaust by building a future of dignity and equality for all by investing in education and youth.

The Permanent Representative of Israel to the United Nations (Vienna), Ambassador Talya Lador-Fresher highlighted the commitment to the Universal Declaration of Human Rights enshrined in the UN Charter to guide us towards a better place.

The commemoration ceremony, organized by the Permanent Mission of Israel to the United Nations in cooperation with the UN Information Service (UNIS) Vienna, also featured the poster exhibition "State of Deception: The Power of Nazi Propaganda, provided by the Holocaust and the United Nations Outreach Programme in cooperation with the United States Holocaust Memorial Museum, and included musical performances by theJehuda Halevi Music School Choir and the Israeli artist Ofer Canetti, who played the powerful "Sonata for Solo Cello"by Paul Ben-Haim .

In accordance with the Jewish mourning rituals, two prayers were recited by Rami Langer: the prayer "Kaddish", a hymn of praises to God and "El Maleh Rachamim", a funeral prayer for the ascension of the souls of the dead. Then he lit a memorial candle for the victims of the Holocaust. 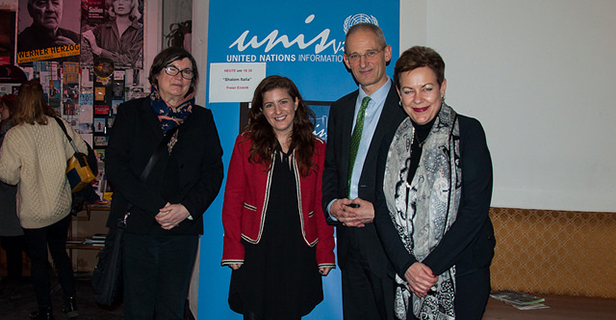 As part of the events to mark the International Holocaust Remembrance Day, Ciné-ONU Vienna presented the compelling documentary "Shalom Italia" on 23 January 2017. The film tells the story of three aging but young-at-heart Jewish brothers who return to Italy in search of the cave that sheltered them as young boys seventy years earlier, when their family went into hiding in the Tuscan mountains to escape the Nazis occupying Italy. But, more than a search to find a geographical location, the documentary explores the subjective nature of memory and how a traumatic past guides us through our present lives.

The screening was followed by a discussion with the director of the film, by Israeli filmmaker Tamar Tal Anati, Martina Maschke, Head of Department for Protocol, Bilateral Affairs and Holocaust Education - international at the Austrian Federal Ministry for Education and Heidemarie Uhl, Senior Researcher at the Austrian Academy of Sciences in Vienna. UNIS Vienna Director, Martin Nesirky, moderated the discussion.

Both Ambassador Talya Lador-Fresher and the Permanent Representative of Italy to the UN (Vienna) Ambassador Maria Assunta Accili Sabbatini emphasized the moral duty upon us all to use this International day to instil the memory of the tragedy in younger generations as a much-needed reminder, especially in challenging times, where irrationality and religious intolerance are on the rise, and a certain democracy fatigue is looming in front of us.

The Ciné ONU Vienna screening was organized by UNIS Vienna in cooperation with the Permanent Missions of Israel and Italy to the United Nations (Vienna), this human world (THW) Film Festival and Topkino. 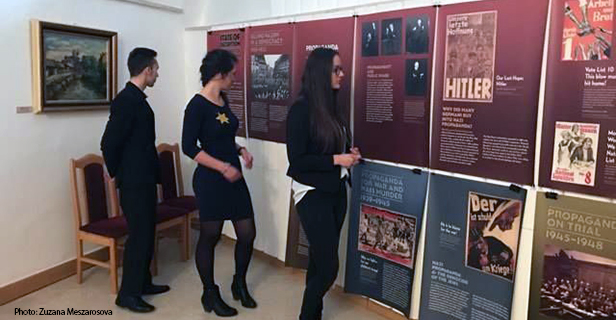 In Slovakia, the business secondary school in Levice, with the support of UNIS Vienna, organized a Holocaust remembrance ceremony at the Concert Hall of the Tekov Museum. The event featured the screening of the movie "The Last Flight of Petr Ginz", the poster exhibition "State of Deception: The Power of Nazi Propaganda, and the award ceremony for the best essay on theme "Stories of Holocaust victims". The students themselves delivered keynote speeches and moderated a programme about the concentration camp in Auschwitz called "A story of a camp of faded lives". 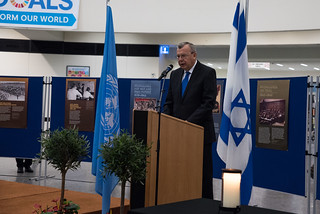 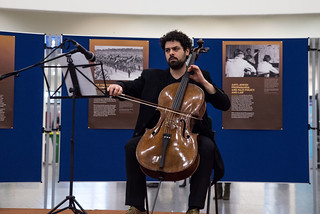 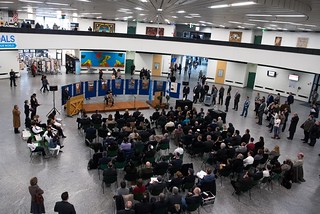 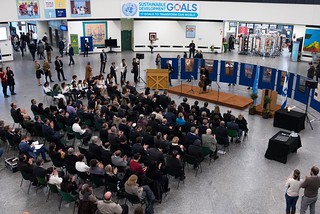