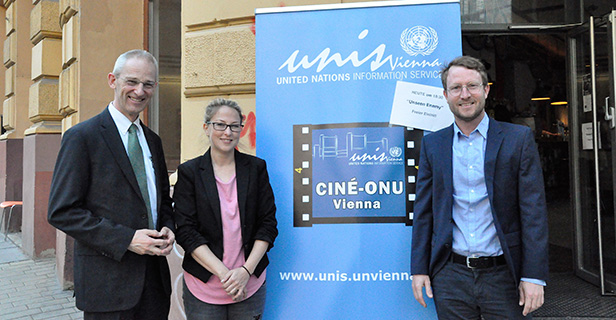 Unseen Enemy - the spreading of the virus

To mark World Health Day on 7 April, the United Nations Information Service (UNIS) Vienna, in cooperation with this human world film festival and Topkino, organized the Ciné-ONU screening of the documentary "Unseen Enemy" on 9 April.

"Unseen Enemy" explores the reasons why the 21 st century has been witnessing a transformation of minor disease outbreaks into full blown epidemics that threaten the globalized world. Increased virulence and spread, as well as the ways societies and individuals can work together to reduce the risk of falling victim to a dangerous virus, are analysed through the case studies of three recent epidemics: Ebola, Influenza and Zika.

After the screening, a personal video message from the director, Janet Tobias,was shown. She explained that she had initially intended to make a descriptive documentary about the past and the future, but instead circumstances led to the creation of a film about the present as diseases started to emerge more frequently and with more far-reaching consequences. Preventing those diseases from growing into epidemics, the director noted, is an action that would require global concerted effort.

The screenings were followed by a panel discussion with Dr. Bernhard Benka MD, Head of the Department of Communicable Diseases, Crisis Management and Disease Control at the Austrian Federal Ministry of Labour, Social Affairs, Health and Consumer Protection; and Hanano Yamada, Entomologist at the Insect Pest Control Section of the International Atomic Energy Agency (IAEA). The event was moderated by UNIS Director Martin Nesirky.

"What you see in the movie is basically what we deal with every day," said Bernhard Benka. Also, according to Dr. Benka: "Trust in public health authorities plays an important part. It is therefore important to talk to people and to properly respond to pressure from social media, as we are currently facing growing vaccine hesitancy. The voice of people taking an anti-vaccine stance is louder than the scientific voice, but it should actually be easy to convince them, because there is so much scientific evidence."

Hanano Yamada explained the link between her work at the IAEA and the threat of viruses: "I spend a lot of time with mosquitos. It is important to keep an eye on them, even in Austria. Climate change is one factor in the spreading of vectors - tiger mosquitos already found their way here." The tiger mosquito, also known as Aedes albopictus, is an important vector and disseminator of the Zika, Chikungunya and Dengue viruses.