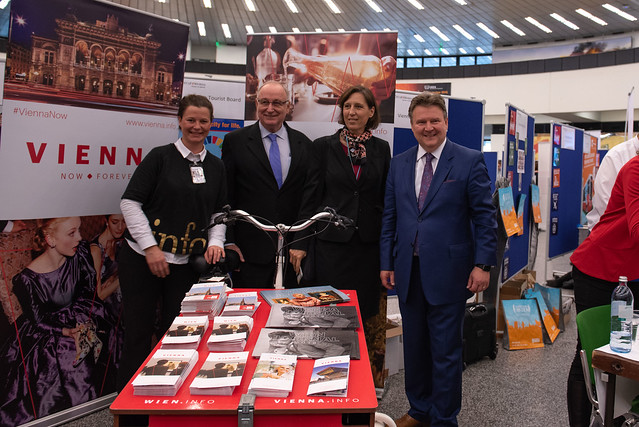 Gathering at the Vienna International Centre (VIC), Viennese city representatives and United Nations senior officials and staff marked the 30th anniversary of the Vienna Service Office on Friday, 16 November 2018. The Mayor of Vienna, Michael Ludwig, who was on his first official visit to the VIC, was welcomed by Yury Fedotov, Director-General of the United Nations Office at Vienna and Executive Director of the United Nations Office on Drugs and Crime and other heads and senior representatives of the Vienna-based UN organizations.

In his speech, Mayor Ludwig described the Vienna International Centre as “a true Viennese landmark”. He said: “I am proud that Vienna is one of four headquarters of the United Nations. It is the centre of international meetings in the heart of Europe.”

The event also featured a musical performance of the children’s choir “Superar” and the opening of the “Vienna Day” Exhibition with information stands representing more than twenty different departments and service offices of the City of Vienna.

The Vienna Service office is an advice centre of the City of Vienna located at the VIC which provides information on education, cultural events, public transportation, health and social services, to staff members of the Vienna-based UN organizations and their families, especially newcomers.