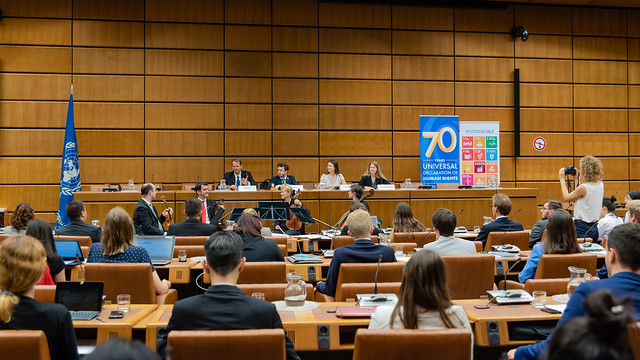 This year’s Vienna International Model United Nations (VIMUN) drew over 200 participants from all over the world to debate current issues in a simulation of United Nations meetings. The participants aged between 18 and 35 had the opportunity to not only act like real UN delegates but to contribute in an authentic setting at the UN Headquarters in Vienna.

In four different committees, young UN enthusiasts were able to enhance their public speaking, leadership, problem-solving and communications skills while negotiating with people from a diverse range of nationalities. Discussing a variety of complex issues over four days, with ever-changing scenarios gave them the ability to practice their anticipation skills.

In line with the 2018 celebration of the 70th anniversary of the Universal Declaration of Human Rights, students and young graduates discussed “Freedom of Religion or Belief in the Right to Privacy in the Digital Age”. Other participants focused on topics such as “Radiocative Waste and Spent Fuel Management”, “The Situation in the Middle East- Syria” and “New ‘Trade Wars’, Regional Economic Alliances and Sustainable Development Goals: What Role for the WTO?”.

UNIS Vienna Deputy to the Director Sonja Wintersberger delivered a keynote speech. She emphasized how this generation of delegates both in their daily life and at the Model United Nations conference is more connected than ever, which allows them to engage in ways that were not possible in the past. She urged the participants to continue their engagement for and with the United Nations as active global citizens and also in the roles that they will hold in the future.

Reflecting on his VIMUN experience, Erwin Kriegshammer of the VIMUN IAEA committee said: “I was hooked immediately, I found it so great to meet different people from all over the world, from all cultural backgrounds and have a discussion with them to delve into the politics of a completely foreign nation”. He explained what he finds so special about the  Model UN: “To get to know another countries policies and to experience diplomacy in a sense, where sometimes you have to defend positions that are not really yours, but still, you have to represent your country.” In his opinion this is something everyone who wants to make a career in diplomacy should learn.

VIMUN 2018 was prepared by a team of student volunteers from different fields and countries under the guidance of Michael Pfeifer.

The simulation conference, held from 29 July to 2 August, is organized by the UNYSA-AUSTRIA-AFA and hosted by the United Nations Office at Vienna (UNOV).