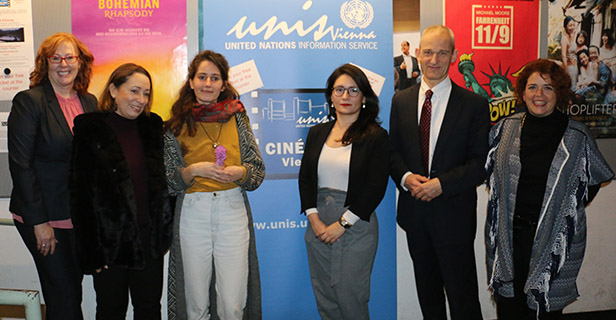 As a relatively new scientific branch, bio-acoustics observes the whole eco-system rather than just specific species to understand their interactions. Modern sound technologies allow scientists to distinguish which species are missing in the system, just in a few seconds. Film director Nika Saravanja's fascination of this topic, led her to create an authentic audio-visual experience of the yet largely undiscovered rainforest Yasuní in Ecuador.

On 4 February 2019, Ciné ONU Vienna screened the award-winning documentary "Dusk Chorus", which allowed the audience to get immersed in the unique soundscapes of the place with the highest biodiversity in the world. As usual, the screening was followed by a panel discussion, with the film director, Nika Saravanja, Tammy Taylor, Director of the International Data Centre at the Comprehensive Nuclear-Test-Ban Treaty Organisation (CTBTO), and Irianna Vlachopoulou, Associate Scientific Affairs Officer of the Space Applications Section (SAS) from the United Nations Office for Outer Space Affairs (UNOOSA). They discussed the use of technology to protect biodiversity.

Ms. Vlachopoulou stressed the importance of space technologies to observe environmental changes, providing important data to protect our planet: "Our satellites take pictures of how forests are being eliminated, how desertification is changing local ecosystems and lakes are becoming less and less resistant to climate change." Ms. Taylor explained that their verification system to detect nuclear explosions can also be used to monitor the effects of climate change, such as changes in the migration patterns of whale populations or the calving of icebergs and movement of glaciers.