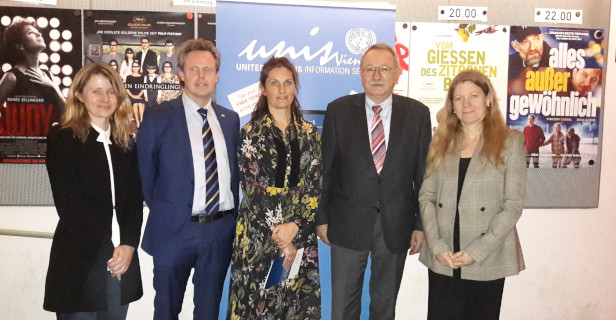 Ciné-ONU screening of "Push" on the right to adequate housing

The second Ciné-ONU screening of 2020, organized by the UN Information Service Vienna at the local arthouse cinema Topkino, was dedicated to the human right to adequate housing, to mark the World Day of Social Justice. The evening was supported by the Permanent Mission of Sweden to the United Nations (Vienna).

The Swedish documentary 'Push' by Fredrik Gertten accompanies the United Nations Special Rapporteur on the right to adequate housing, Leilani Farha, during her advocacy work. Through this close-up look at Leilani Farha's work, where she visits people and communities facing housing problems all around the world, it soon becomes clear that we are facing a global problem. Finally, Farha, her team and mayors around the world start a movement called 'The Shift' to tackle this problem together.

The event kicked off with opening remarks by Sonja Wintersberger, Deputy to the Director of UNIS Vienna, and Sten Engdahl, Counsellor and Head of Trade and Promotion at the Permanent Mission of Sweden. The panel discussion after the film featured three experts on the topic: Yvonne Franz, University Assistant at the University of Vienna's Department of Geography and Regional Research; Kurt Puchinger, Political Adviser for housing and urban planning and former Director of Planning at the City of Vienna; Karin Zauner-Lohmeyer, Spokeswoman of the European Citizens' Initiative "Housing for All"; and was moderated by Sonja Wintersberger.

Ms. Franz addressed the documentary's theme giving insights into the housing situation in Vienna.  According to her, "the issues mentioned in the film are maybe not as visible and dramatic in Vienna, but elements of financialization can also be seen in the city". In his remarks, Kurt Puchinger explained why social housing in Vienna is a success story. Unlike in other big cities, houses were not sold as extensively to foreign companies as the  statistics prove. In fact, as Puchinger stated, more than 65 per cent of people are living in city-owned or subsidized social housing. Ms. Zauner-Lohmeyer reiterated the importance of knowledge transfer and data on housing on the urban level. She also highlighted the importance of young people addressing this topic.

From the audience, Katrin Lichtenberg from the United Nations Office for Project Services (UNOPS) explained how her agency engages in social impact investing initiatives around social housing. The cinema room was packed and many of the 110 participants had questions and comments to raise with the panellists which goes to show how relevant the topic of adequate housing is for the people of Vienna and beyond.