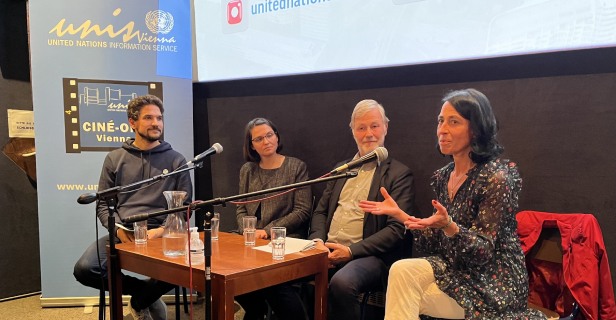 Retreating Glaciers: Ciné-ONU film exposes the rapid disappearance of one of the planet’s most important resources

“The next ten years are key,” said Helmut Hojesky, Director and Chair of Alpine Climate Board, Austrian Federal Ministry for Climate Action (BMK), at the Ciné-ONU Vienna screening and Europe premiere of the documentary “The Last Glaciers” on 12 Oct 2022. During the panel discussion after the film, he stressed that we all should find the balance between mitigation by reducing our carbon footprint and adaptation to the negative effects of climate change.

Ahead of the United Nations Climate Change Conference COP27, over 100 participants joined the screening of this powerful film that tells the story of climate change through the visual impact of one of the planet’s most important and yet critically threatened resources – glaciers. A heart-wrenching story of discovery that took the audience on a thrilling ride of extreme sports whilst sharing the camaraderie of the film protagonists as they confront personal challenges amongst the immense beauty of natural mountain environments.

Elke Ludewig, Head of the Sonnblick Observatory, Zentralanstalt für Meteorologie und Geodynamik (ZAMG), who also joined the panel after the film, experiences the rapid retreat of glaciers first-hand. She told the audience: “Since the 1980s there is no snow covering the mountains in the summertime.”

UNIS Director Martin Nesirky also drew attention to the speed of climate change in his opening remarks and highlighted that the temperatures in the Austrian Alps have increased twice as fast as the average in the northern hemisphere.

Rainhard Fuchs, Co-founder and CCO of Glacier and moderator of the panel discussion, said: “You cannot reverse the past, but you can change the future.” And bringing about change is only possible if we, humans, do more, he added.

The screening took place at the arthouse cinema Top Kino, Vienna, Austria, and was organized by the United Nations Information Service (UNIS) Vienna in cooperation with the UN Environment Programme (UNEP) Vienna Office and Glacier, as part of the Glacier Climate Week 2022. 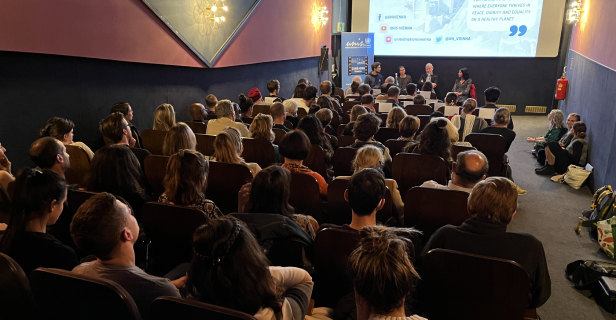