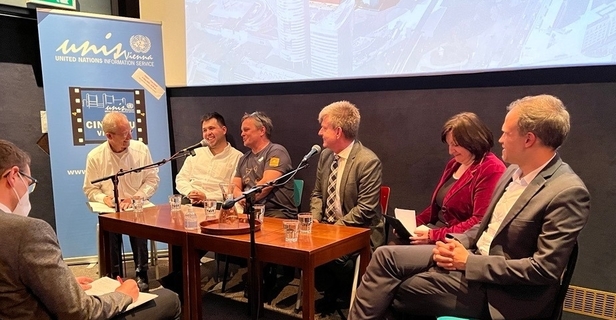 “On this World Telecommunication and Information Society Day, we focus on digital technologies for older people and healthy ageing. From building smarter cities to combatting age-based discrimination at the workplace, ensuring financial inclusion, safeguarding independence, and supporting millions of caregivers across the world – information technology has vast potential to improve the lives of older people and their families and communities.” — Secretary-General Antonio Guterres message ahead of World Telecommunication and Information Society Day 2022.  (Full message available here.)

This year’s message from the UN Secretary-General for World Telecommunication and Information Society Day stresses the importance of tackling age-based discrimination in the age of rapid digitalization of labour industries. Although digitalization has created its share of inequalities, it has the potential to engage and support all workers and societies irrelevant of age. This month’s in-person Ciné-ONU Vienna screening of “A New Shift”, tells the same story. It’s a documentary that follows ex-miner Tomáš Hisem as he pursues a new career path in object-oriented programming after his mine was closed suddenly. The film draws a stark picture of Tomáš’ struggles as he not only tries to master a completely different skill but also finds a way into a very young and high-tech industry after spending almost half of his life “underground”.

The Ciné-ONU Vienna screening, organized by the United Nations Information Service (UNIS) Vienna, was supported by the Permanent Mission of the Czech Republic to the United Nations and the Czech Centre Vienna. The panel discussion featured Film Director, Jindřich Andrš and Film Protagonist, Tomáš Hisem as well as experts from the Austrian Chamber of Labour, Michal Soder, and the Delegation of European Union to the International Organizations in Vienna, Konstantina Kostova. It was moderated by UNIS Vienna Director Martin Nesirky.

Film Director Andrš told the audience that the documentary was originally a student film. He was impressed by Tomáš who believed that it is not just his personal story but that it was a good story to tell because it could inspire others. At the same time, some of Tomáš' friends are still sceptical about his change. Andrš shared a few personal stories about how the film shooting took place and how he met the protagonist. He recalled with a laugh that in response to his questionnaire at the mine, there was one answer that stood out from the rest, for being both thought-provoking and philosophical; But after meeting Tomas he could not believe this answer came from him: “A person and a machine can have a relationship”.

On that note, European Union (EU) Delegation Counsellor Kostova said that the transformation taking place nowadays depends on perception, presentation and people. Furthermore, all the challenges are also opportunities at the same time. For the EU, the European Green Deal is an example of an opportunity that can support and sustain solidarity with those at the forefront of the transformation. She emphasized that the Green Deal is “a holistic instrument” taking everyone and everything into account. Michael Soder, Economist at the Austrian Chamber of Labour said that: “The transformation process is not about money, it is not about jobs, it is not about business. It is about life perspectives, it is about decent work, it is about decency, and it is about the life of people.” He added that the core of the digital transformation is a social question and you have to create tailor-made measures to support the people in the regions who are hugely exposed to these transformation processes.

The audience joined in the lively discussion as well. One person commented on this “very enjoyable film, [that is] immensely uplifting, just what we need after the pandemic”. Like the Secretary-General, she connected the issue to ageism. Another member of the audience asked the protagonist whether he had any recommendations for other retraining programmes. Tomáš replied that: “The requalification programmes themselves are not sufficient. People who undergo them should also have the opportunity to have some practice.”

Tomáš’ bright optimism was present throughout the documentary and during the discussion. In the film he says: “No one is born an IT specialist, just like no one is born a miner.” A lesson to be learned in this rapidly changing world.