The Millennium Development Goals have been the most successful anti-poverty movement in history, according to the finding's of the 2015 MDGs Report The achievements of the MDGs will serve as a springboard for the new sustainable development agenda to be adopted this year:

However, gender inequalities persist. Big gaps exist between the poorest and the richest, as well as between rural and urban areas. Climate change and environmental degradation undermine progress achieved. And millions of poor people still live in poverty and hunger, without access to basic services.

In September 2015, the world is going to adopt a new set of global goals which builds on the successes of the MDGs and ambitiously breaks fresh ground on inequalities, economic growth, decent jobs, cities and human settlements, industrialization, energy, climate change, sustainable consumption and production, peace and justice.

At the Millennium Summit in September 2000 world leaders adopted the UN Millennium Declaration, committing their nations to a new global partnership to reduce extreme poverty and setting out a series of time-bound targets, with a deadline of 2015, that have become known as the Millennium Development Goals.

The MDGs are the world's time-bound and quantified targets for addressing extreme poverty in its many dimensions - income poverty, hunger, disease, lack of adequate shelter, and exclusion-while promoting gender equality, education, and environmental sustainability. They are also basic human rights - the rights of each person on the planet to health, education, shelter, and security.

The Millennium Development Goals Report is an annual assessment of global and regional progress towards the Goals. It is compiled by over 28 UN and international agencies and is produced by the UN Department of Economic and Social Affairs.

Watch the video 'Millennium Development Goals and beyond 2015' 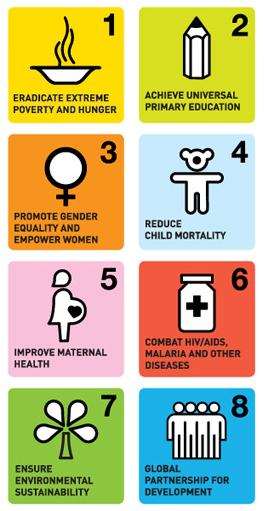