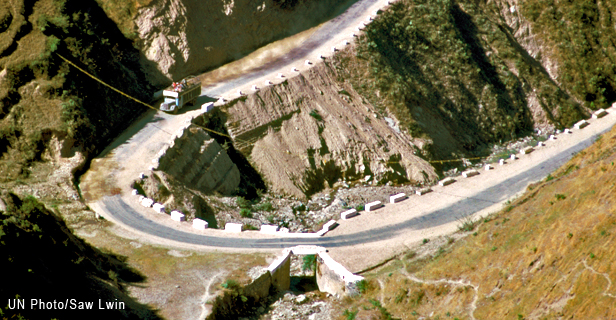 Nearly half a billion people are living in landlocked developing countries (LLDCs), where trading their products and goods is more costly than in those countries with direct access to ports and the sea. They often have poor roads and infrastructure.

Kazakhstan, for example, is 3,750 kilometres from the nearest seaport. To export ores and metals, one of its main export products, it takes, on average, 81 days. Compare this to Austria, also landlocked but with good infrastructure such as roads and less than 100 km to the sea, where exporting goods takes on average only nine days. So exporting costs are much higher for Kazakh exporters than Austrian ones.

In November Austria will be hosting the second Landlocked Developing Countries Conference in Vienna to look at ways to help LLDCs move forward with their sustainable development. Two thousand participants are expected to attend the conference, including Government representatives, Heads of States and UN Secretary-General Ban Ki-moon.

What are landlocked developing countries?

Landlocked developing countries (LLDCs) lack territorial access to the sea which means they can face significant challenges in trade, transport and infrastructure amongst other areas. All LLDCs have low gross domestic product (GDP) and low human development. A large proportion of the 32 landlocked developing countries are also classified as least developed countries. There are 16 LLDCs located in Africa, 10 in Asia, 4 in Europe and 2 in Latin America with a total population of 442.5 million in 2012.

Because LLDCs are located far from major world markets, trade is difficult. LLDCs are heavily reliant on neighbouring countries for the transit of goods. Often, developing transit countries have poor infrastructure, fragile political situations and costly administrative practices. Roads and railways are frequently in bad condition: for example, only nine transit countries have more than 50 per cent of their roads paved. Strikes, civil wars and natural disasters are also frequent.

All these factors contribute to high transport costs. According to UNCTAD, typically LLDCs spend twice as much of their export earnings on transport and insurance services as the average developing country and three times more than the average developed country. This becomes evident when comparing Burundi, an average LLDC to Denmark, a developed country: in 2011, Burundi's average exports took 47 days to arrive at their destination, compared to only 5 days for Denmark's exports. Danish exporters needed 4 documents for their exports, whereas their Burundian counterparts had to obtain 9 documents. The costs of exporting one container from Burundi were with US$ 2,747, much higher than those exported from Denmark (US$ 744).

In 2011 the share of Landlocked Developing Countries in global trade was only 1.17 per cent. These figures are reflected in the GDP and Human Development Indices (HDI) of LLDCs. GDP per capita is below 1,000 US dollars in 19 LLDCs and the average HDI was nine points below the world's average HDI.

Landlockedness is a major obstacle to development as the high transport costs lead to lower levels of trade, which impacts negatively on economic growth and affects progress in achieving sustainable development.

The Second United Nations Conference on Landlocked Developing Countries is taking place from 3-5 November 2014 in Vienna, Austria. It will build upon the first conference, which was held in Almaty, Kazakhstan, in August 2003, where the Almaty Programme of Action was adopted. This focuses on transit-transport cooperation between landlocked and transit developing countries.

The United Nations Office of the High Representative for the Least Developed Countries, Landlocked Developing Countries and the Small Island Developing States ( UN-OHRLLS) was established by the United Nations General Assembly in 2001. Its main function is to support the Secretary-General, the Economic and Social Council, the General Assembly and Member States with carrying out the Programmes of Action and to advocate for least developed countries, landlocked developing countries and small island developing States together with relevant parts of the United Nations as well as with civil society, the media, academia and foundations.

Draft resolution submitted by the President: Programme of Action for Landlocked Developing Countries for the Decade 2014-2024

Draft Outcome Document of the Conference

Photos of the Conference

Media events during the Conference