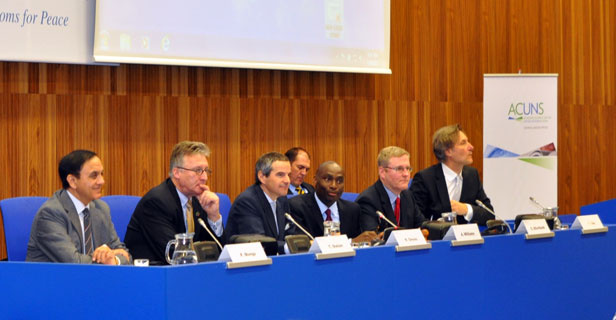 Have the United Nations Agencies Adapted to the 21st Century?

The Academic Council on the United Nations (ACUNS) Vienna Liaison Office in cooperation with Vienna based UN entities, United Nations Associations (UNAs), universities and educational institutions, and with the support of the Federal Ministry for European and International Affairs, organized a conference titled "Have the UN Agencies Adapted to the 21st Century?". The conference was held at the Vienna International Centre (VIC) from 9 to 11 January 2013.

Discussions and colloquia sessions included nuclear technology and sustainable development, knowledge management, the prospects of entry into force of the Comprehensive Nuclear-Test-Ban Treaty (CTBT), uses and misuses of data sets, security challenges to nuclear energy, engaging youth in the United Nations and the rise of the Global South.

ACUNS Chair and President of the Hague Institute for Global Justice, Abiodun Williams, opened the conference. In his keynote speech he referred to the complexity of managing conflicts and the importance of conflict prevention and proper private sector involvement.

UN Assistant Secretary-General for Policy Coordination and Inter-Agency Affairs Thomas Stelzer pointed to the necessity of a green economy based on the Rio+20 agreements. He particularly highlighted the promotion of sustainable economic development, implying an overall reduction of emissions while at the same time increasing the number of jobs.

The 2012 UN Youth Delegate of Slovakia Milena Dudasova provided valuable insights of the range of activities she is involved in and called on the young audience to become engaged in activities within or outside the UN system to make the world a better place.

The presentations and speeches were followed by a lively discussion with the audience and reflected the high interest of the students to participate in and contribute to the work and mandate of the UN.