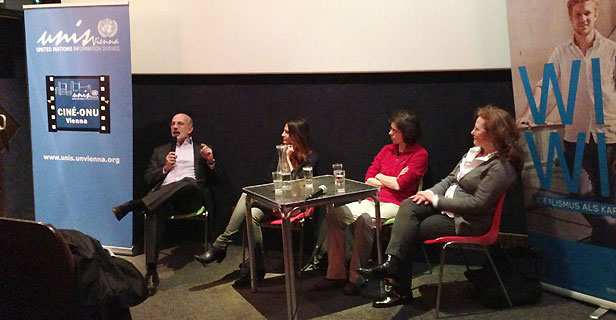 UNIS Vienna's regular film project -- Ciné ONU Vienna - addressed the Secretary General's Global Education First Initiative with the screening of "The First Grader" by Justin Chadwick. The film intended to draw attention to the educational crisis the world is currently facing and demonstrate the importance for people - adults as well as children - to receive education as a way towards a better life.

The screening, organized in cooperation with Topkino and this human world film festival, was followed by a panel discussion with Cristina Pitassi from the United Nations Industrial Development Organization (UNIDO), Martina Kopf a Researcher from the Institute for African Studies at the University of Vienna and Isabella Thurin, a Fellow from the organization Teach for Austria. The discussion was moderated by UNIS Vienna Director Janos Tisovszky.

The film, the First Grader, tells the story of a small, remote mountain top primary school in the Kenyan bush where hundreds of children are jostling for a chance for a free education as newly promised by the Kenyan government. One new applicant causes astonishment when he knocks on the door of the school. He is Maruge, an old Mau Mau veteran in his eighties, who is desperate to learn to read at this late stage of his life. He fought for the liberation of his country and now feels he must have the chance of an education so long denied to him - even if it means sitting in a classroom alongside six-year-olds. However parents and the authorities find it difficult to accept his presence in the class room and try everything- including threats- to keep him away from school. His courage and perseverance set an example for the whole society in Kenya and the world, showing the importance of education and learning regardless of age.

The invited experts gave valuable insights on the topic of the film both in remote underdeveloped areas such as Africa as well as in Austria. The role of education in enhancing empowerment and building strong societies, and the slow but gradual process of governments perceiving basic education (and also secondary education) as one of the most important priorities of a country, were other topics discussed.

Martina Kopf, a researcher on African studies, also raised the language issue in education especially in African countries after the colonial period which was mentioned in the film. Furthermore she said that education in Africa has always been important but never the first priority for governments.

Christina Pitassi working for UNIDO's Rural Entrepreneurship Development and Human Security Unit mentioned the programmes initiated by the organization providing technical assistance for education in order to promote economic transformation in developing countries. She stressed that is not merely about acquiring knowledge at schools but more the capability to make practical use of that knowledge.

Coming back to Austria, Isabella Thurin spoke about the initiatives in Austria for children coming from disadvantaged social backgrounds such as organizations like Teach for Austria and Gemeinsames Lernen. She also brought up an important question: is education a privilege or is it a duty?

The audience raised various questions and comments on issues as the commitment to improving education, the importance of primary education, and the chances of good secondary education, as well as the question of identity.

The panel experts and the audience agreed that the emphasis should be put on the quality of education. They also concluded, that through education, people from difficult socio-economic backgrounds receive the opportunity to choose their own identity and find better options in their own life. So in terms of the education of every child, of every person even that of an 84 year old man matters.