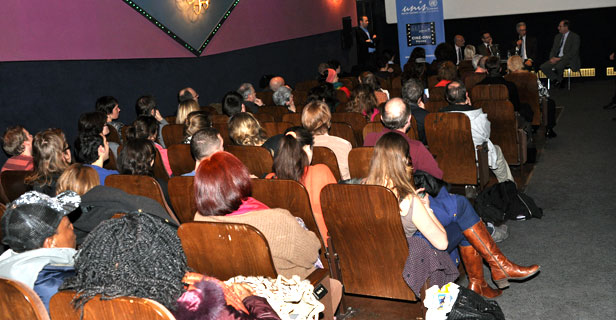 In his opening speech UNIS Vienna Director Janos Tisovszky drew the audience's attention to the fact that the choice of these particular stories by the filmmakers was to offer a message of inspiration to today's ambassadors. Since, at crucial moments, when the need for strong personal decisions is of great importance, those responsible for them have to act in accordance with their own unwritten instructions, and may be breaking the rules.

The film's narrative is built around the research of a young Rwandan anti-genocide activist Stephanie Nyombayire, who lost almost all the members of her family in the Rwandan Genocide of 1994. Sir Martin Gilbert, the renowned historian, specializing on Holocaust, accompanies her, as they travel across 15 countries and three continents interviewing survivors and descendants of the diplomats.

These deep and touching stories led the panel discussion to consider how such daring acts by diplomats could happen in the world of entrenched bureaucracy. The panel guests unanimously agreed that they could not argue with the heroism and courage these diplomats had shown.

In response to a question about what a modern diplomat can do to prevent acts of violence, Mr. Bame emphasized the following: "Private negotiations can surely be called to reinforce public diplomacy". According to him it is mainly through first-hand communication that it is possible to achieve justice on an everyday basis.

Ambassador Greminger stressed the importance of prevention to ensure that such tragedies as the Holocaust never take place in the future.

Ambassador Shir-On appealed to the public with the message "Tikkun olam" which in Hebrew means "to heal the world". According to his belief, we now have many possibilities to help those in need. However, sometimes the drastic measures to change things can call for overcoming the standard barriers -which is what the righteous diplomats did.

The participants of the discussion agreed about the primacy of the role of human virtues in directing the diplomats' deeds in the face of great danger. Acknowledging and remembering these brave people who acted out of their moral convictions is an important task of the international community and particularly the United Nations.

May 17, 2022
Ukraine: Support for war crimes investigations ‘of paramount importance’
May 17, 2022
First Person: I am a woman, a refugee, ‘I am who I am’
May 17, 2022
Minimal risk of monkeypox transmission in UK following confirmed case
May 13, 2022
Mariupol evacuations ‘a glimmer of hope’ in Ukraine war
May 12, 2022
Dialogue and cooperation needed for ‘interlinked global crises’ UN chief says in Austria
May 12, 2022
COVID-19 Measures at the Vienna International Centre
Tweet