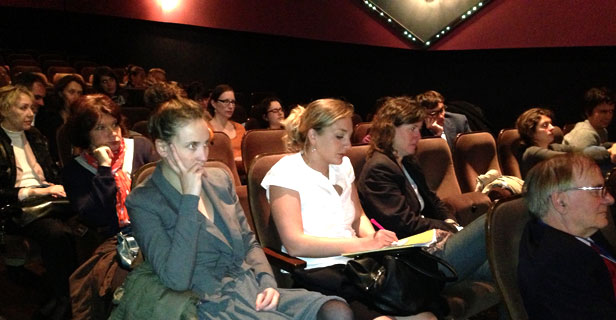 On the occasion of the World Environment Day, which is celebrated every year on the 5 th of June, the United Nations Information Service Vienna (UNIS) in cooperation with this human world (THW) Film Festival and Topkino, screened the documentary "LoveMEATender" by Manu Coeman as part of its regular film screenings series CINE ONU Vienna.

Illustrative, dynamic and provocative, this film does not aim to shock the audience with brutal scenes but raises awareness of the processes and consequences of meat production. Since the second World War meat consumption in the developed countries has drastically changed. Because meat was only affordable for wealthier people in the early post-war years, it became a symbol for people of economic security. Nowadays it is all about producing food in larger amounts, more quickly and at a lower price. This price, however, is not as low as we might think: it costs natural resources and often our own health.

In his film Manu Coeman presents a broad spectrum of opinions: from the impact the meat consumption on nature, the environment and the human body to the conditions in which the animals we eat have been raised and killed. Using cartoons in a playful manner the director presents a lot of statistics as well as showing many respected experts' opinions in various fields.

It is difficult to imagine how we affect nature through our everyday food choices. Meat consumption contributes to climate change more than vehicles. Furthermore, it costs an enormous amount of water: meat consumption alone requires around 45 per cent of the water on the planet. On top of this it may have a dangerous impact on our health: meat consumption creates an imbalance between omega 3 and 6 in our body, which is one of the reasons behind: "… heart diseases, diabetes, chronic and clinical depression, aging of the brain, … cancers…", says Oliver Coudron in the film. The expert Vandana Shiva says that: "Entire generations are growing up eating food that is deadly for them". Overall the documentary gives a new insight into the statement "I am what I eat".

"LoveMEATender" also emphasizes the cruel conditions, in which many animals are raised and killed. As David Waltner-Toews states, the circumstances, in which animals have been raised nowadays create a perfect scenario for epidemics.

Nevertheless, the tone of the movie is an optimistic one: it presents several approaches through which the consumption of meat can be made safer for us and for the planet: "We must ensure farming is modernized, not industrialized," advises Baba Dioum, general coordinator of the Conference of Ministers of Agriculture of West and Central Africa (CMA/WCA).

Eva Jelinek presented this year's World Environment Day campaign Think.Eat.Save: a partnership between UNEP, FAO and Messe Düsseldorf, and in support of the UN Secretary-General's Zero Hunger Challenge. The main goal of this initiative is to increase the awareness on the issue of food waste and the impact it has on nature and environment. Christian Jochum also raised this issue and reminded us that most of the food waste on the planet is avoidable. He underlined the efforts and progress that has been made on a national level in Austria to increase the knowledge on this topic. One of the organizations, which is fighting food waste, is Wiener Tafel. Volunteers collect surplus food from supermarkets, markets and others and give it to those in need. In this manner they aim to create a bridge between plenty and scarcity. Christian Jochum presented the main purposes of the organization and described the everyday responsibilities of the volunteers. All the participants underlined that there are ways to reduce food waste and simple things which we can do in our everyday lives, starting with the decision to eat happy meat.