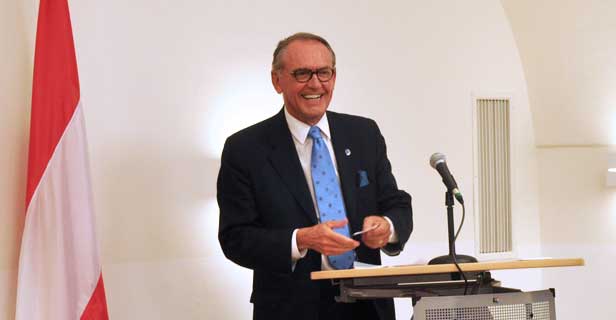 Challenging times for the United Nations

" I have to accept the world as it is, but I also have to stand for the world as it should be, " the United Nations Deputy Secretary-General Jan Eliasson told an audience in Vienna recently referring to the need to be both a realist and an idealist in order to achieve our goals.  He was discussing the challenges for peace, development and human rights facing the United Nations in the 21st century at an interactive discussion organized by the International Peace Institute and the Diplomatic Academy of Vienna.

For his keynote speech he chose to elaborate on four major new trends and three challenges.  According to the Deputy Secretary-General, a clear geopolitical and geo-economical shift towards the East and emerging powers is underway; the need to take care of the environment and to tackle climate change are increasingly important in today's world; a great revolution in the communication and information sector is currently taking place, making it difficult for people to hide anything from the world; and this century will see great empowerment of women. The three challenges he talked about were the situation in Syria; the post-2015 development agenda; and the violation of human rights.

He emphasized the need for international cooperation: as the global agenda transcends national affairs like never before, it is impossible to talk about issues such as climate change and migration solely on a national level. He also highlighted the vital need for the United Nations to team up on an equal basis with others involved in solving today's problems: " Today's problems cannot be solved by the UN alone - you have to bring in the parliaments, governments, civil society, the private sector, the academic and scientific community, and think tanks. What we should achieve is that we don't work vertically. As long as we connect horizontally we can really make a difference."

Regarding Syria, Deputy Secretary-General Eliasson mentioned that there was a risk of a military escalation and that there were difficulties in identifying the opposition side of the delegation for negotiations with the Syrian government.

On the post-2015 development agenda he wanted to see a continued focus on poverty eradication but an emphasis too on sustainability. Jan Eliasson is a strong believer in institutions. He said that his native country Sweden used to be one of the poorest nations in Europe during the 1920s, but due to a solid and fair education system, good infrastructure and strong institutions the country has been able to reach its current level of development. "There is no peace without development, no development without peace, and no peace and development without respecting the human rights," he reminded the audience. With regard to the violation of human rights, he continued: "But if you look around the world you see an absolute brutalization. There is a need to be determined to change this, because if this goes on, we will see so much hatred in the world that we will start to get numb."

The Deputy Secretary-General was especially concerned with the humanitarian situation in Jordan and Lebanon where the refugee crisis is posing an enormous threat to the local infrastructure. He stressed the need to support the two countries: "I think the most important thing now is to make sure that this conflict won't spread into Lebanon and Jordan - we have the biggest humanitarian appeal ever in the United Nations to help the Lebanese and Jordanians on the humanitarian front. In Beirut for example, the schools are overcrowded, the health clinics are overcrowded, the job markets are overcrowded - the whole infrastructure is in danger."

During his three day visit to Vienna, United Nations Deputy Secretary-General Jan Eliasson also participated in the 13th High-level Alliance against Trafficking in Persons conference "Stolen Lives, Stolen Money: The Price of Modern-Day Slavery" on 25th June, organized by the Organization of Security and Co-operation in Europe (OSCE); the launch of the World Drug Report 2013 on 26 June at a special meeting of the Commission on Narcotic Drugs; and the "Vienna+20" conference on human rights, celebrating the 20th Anniversary of the UN Office of the High Commissioner for Human Rights (OHCHR) on 27th and 28th June.

Listen to Jan Eliasson's speech in full at the Diplomatic Academy

See photos of the event here