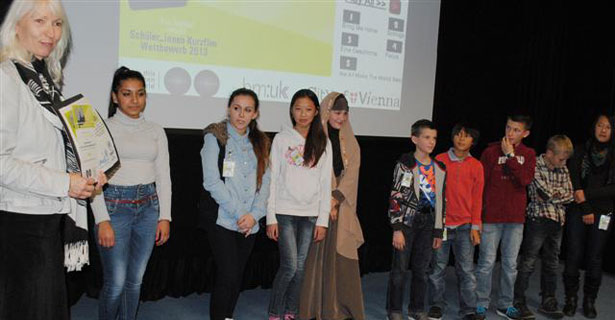 The challenge: human rights explained in not more than three minutes. This seemingly impossible task was tackled by pupils between the ages of 10 and 20 from Austria, Hungary, Slovakia and Slovenia participating in the Youth Short Film competition on Human Rights 2013.

The competition invited students to produce a short film related to the "Universal Declaration of Human Rights" with a special focus this year on children's rights and children seeking refuge. On the occasion of Universal Children's Day and the upcoming Human Rights Day, the winners of this year's competition were awarded at a ceremony on 19 November at the Vienna International Centre (VIC).

Among seventy film submissions the jury selected five best short films and chose three first prizes in the categories animation, feature film, and documentary. Eszter Jánka from Hungary was awarded with the first prize with the film 'Eine Geschichte' (A Story) in the animation category. Martin Jancík, Jakub Belobrad, Filip Dian, Dušan Javorek and Michal Kvocera from Slovakia received the first prize in the feature film category, for their short film called 'Focus'. The short film 'We all make the world beautiful' produced by Art Millaku, Lis Millaku, Viktor Oman, Belmin Mržljak, Lina Chen, Medina Begić, Natalija Alitović, Chenyun Lin, Sevim Salifoska, Vanesa Zidi and Amina Begić from Slovenia won the first prize in the documentary category. The second prize was awarded to Leonie Funke, Magdalena Feisthauer, Veronika Brotrager, Leonie Schauer from Austria with their short film 'Schloga' and the third prize went to Laura Lukács and Luca Lukács from Hungary with their short film 'Bring Me Home'. "I was inspired by what is going on in Syria and I integrated the topic on Syria and the violence at home in my short film," said Eszter Jánka at the ceremony.

The winners received their prizes from the Permanent Representatives of their respective countries to the United Nations in Vienna: Ambassador Balázs Csuday of Hungary, Ambassador Ol'ga Algayerová of Slovakia, Ambassador Blanka Jamnisek of Slovenia and Deputy Permanent Representative Wolfgang Thill of Austria. "We are very proud of them, especially of the migrant children. I hope to screen the short film in other schools and it will help us to promote more tolerance and children's rights," said the Slovenian Ambassador Blanka Jamnisek.

The competition was organized for the fifth time by This Human World (THW) Film Festival and supported by the United Nations Information Service (UNIS), the Office of the United Nations High Commissioner for Refugees (UNHCR) in Austria, the City of Vienna and the Austrian Federal Ministry for Art, Culture and Education. Ruth Schöffl from UNHCR said at the ceremony that she was really touched by the films showing the strength of the people who had had to rebuild their lives completely.

The award ceremony was followed by the opening of the exhibition 'Our rights' presented by the Permanent Mission of Slovenia. The exhibition is based on teaching material on children's rights for 10 -12-year olds, initially developed by the Slovene Ministry for Foreign Affairs within the framework of Slovenia's role as the Chair of the Organization for Security and Cooperation in Europe (OSCE) chairing country in 2005 and translated into 20 languages since then. With the project 'Our rights', Slovenia has actively promoted education on the rights of the child to more than 170,000 children in a number of countries since 2005.