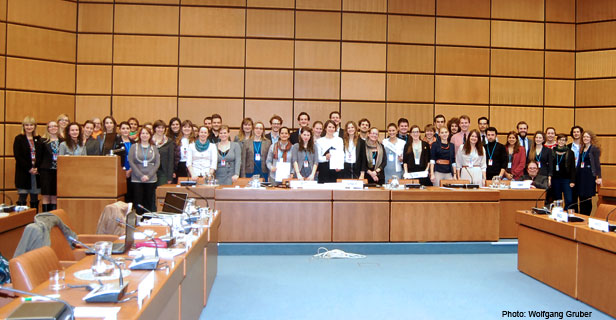 "Getting a grip on reality"

Johannes holds a Master's Degree in Interpreting Studies from the Centre for Translation Studies and participated in a Model United Nations Conference (MUN) for the very first time. "You can get a grip on reality," said Johannes after interpreting last week's simulation conference on sustainable development at the Vienna International Centre (VIC) from English into German. Johannes and 75 other students and recent graduates took part in a MUN, organized by the United Nations Environment Programme- Interim Secretariat of the Carpathian Convention (UNEP Vienna - ISCC), the United Nations Information Service in Vienna (UNIS Vienna) and both, the University of Vienna as well as the University of Natural Resources and Life Sciences (BOKU). The simulation conference took place in close collaboration with the Interpreters' and translators' Association Universitas, the Federal Ministry for European and International Affairs (BMeiA), the Austrian Development Cooperation (ADC) and the World Wide Fund For Nature's Danube Carpathian Programme (WWF-DCP).

During the two day simulation conference, which took place for the sixth time from 12 to 13 December 2013, students gathered together to simulate the seventh session of the Open Working Group (OWG) on Sustainable Development Goals (SDGs) and to deliberate on climate change adaptation and mitigation. These topics are going to be discussed at the upcoming OWG session in January 2014 in New York. "The topic of your conference is one of the hottest subjects on the international agenda at the moment," said Anne Thomas, Deputy to the Director at UNIS Vienna in her opening remarks. She further pointed out that the students did not only have the chance to learn about a topic that is relevant worldwide but to actually participate in the process of finding a solution to the problem.

The students trained their diplomatic and negotiation skills in a real-life setting and focused on five core topics, which were: land degradation, climate change mitigation, adaptation and compensation; energy provision and use; climate migration; sustainable agriculture and water use. "The students used their own prepared papers for discussions, which was one of the new aspects of this year's MUN," explained Wolfgang Gruber from the University of Vienna and main organizer of the simulation conference. Another new aspect  of this year's MUN was its multi-disciplinary approach. Participants featured not only students with a background in International Development or Environment Studies, but also included students from the Centre for Translation Studies and recent graduates from the Interpreters' and translators' Association Universitas.

As a result of this year's cooperation with Universitas and the Centre for Translation Studies, it was possible to communicate in 11 languages at the conference, namely Croatian, Danish, English, French, German, Italian, Polish, Rumanian, Russian, Slovak and Spanish, which set a new record at the VIC. In addition, the cooperation enabled the students to negotiate in English and therefore attracted more international students compared to previous years, when the MUN was held only in German. "It is a great opportunity to interpret into Polish, especially at the United Nations, as I know that Polish is not an official language of the UN", said Agnieszka and Justyna, two Polish junior interpreters from Universitas.

The students benefited also from various experts and their expertise, including representatives of the Austrian Federal Ministry of European and International Affairs (BMeiA) as well as the Austrian Development Cooperation (ADC), the World Wide Fund For Nature's Danube Carpathian Programme, (WWF-DCP) and UNIS Vienna.

Model United Nations conferences are an opportunity for participants to learn more about the work of the United Nations and worldwide relevant issues. Through this enriching experience many participants later choose a career in international relation.