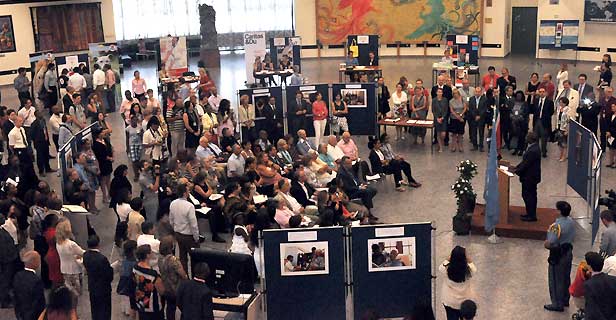 "Nelson Mandela International Day: Everyone can help change the world"

In cooperation with the South African Embassy and Permanent Mission to the United Nations in Vienna, the United Nations Information Service (UNIS) in Vienna organized an exhibition "Intimate Moments with Nelson Mandela" in the Vienna International Centre (VIC) on 18 July 2013 to mark the Nelson Mandela International Day as well as his 95 th birthday.

The exhibition was opened by the Director-General of the United Nations Office at Vienna Yury Fedotov as well as the Ambassador of the Republic of South Africa Xolisa Mabhongo. In his welcoming speech Mr. Fedotov expressed his deep respect and appreciation for Nelson Mandela's work. He encouraged everybody to follow Mandela's example: "As we extend our best wishes to President Mandela on his 95th birthday, let us also give tangible meaning to our feelings of concern by taking action on behalf of others […] This is the best tribute we can pay to an extraordinary man who embodies the highest values of humanity". "Today's celebration of the Nelson Mandela International Day recognizes and honours his commitment to the objective of building a national democratic society; that is united, non-racial, non-sexist, democratic and prosperous," continued Ambassador Mabhongo.

Attended by over 150 people, the exhibition included seventeen photos of Nelson Mandela made available by the Nelson Mandela Foundation. Furthermore, a video, which contained a short documentary of Mandela's life as well as 5-minute montage of his most important historic appearances at the United Nations, was screened.  All visitors had the possibility to share their thoughts and feelings concerning the exhibition in a guest book.

In the spirit of Nelson Mandela Day's motto - "take action, inspire change" - United Nations in Vienna encouraged people to devote 67 minutes of their lives for community service, as Nelson Mandela gave 67 years of his life to the struggle for human rights and social justice.  The visitors of the exhibition had the chance to sign up for volunteer work for four different NGOs - Caritas-Gruft (prepares meals for homeless people), Vienna's Hospital Association (assists elderly), VIER PFOTEN (animal protection organization), SOS Children's Village (offers family-based care for orphaned children) and Ute Bock (assists refugees in need). All these NGOs had information stands at the exhibition and presented their work to the visitors.

As Nelson Mandela has spent the last four weeks in a critical but stable condition in hospital, it is more important than ever to honor his work and to remember his word: "Everyone can help change the world. Each individual has the ability to make the world around him or her a better place. One small step, when you add them all together, can become a global movement for good". Nelson Mandela is unquestionably one of the living icons of our time and an exemplary human being, which we should all aim to live up to.

A commemorative booklet: "Nelson Mandela: In His Words"

Nelson Mandela at the United Nations