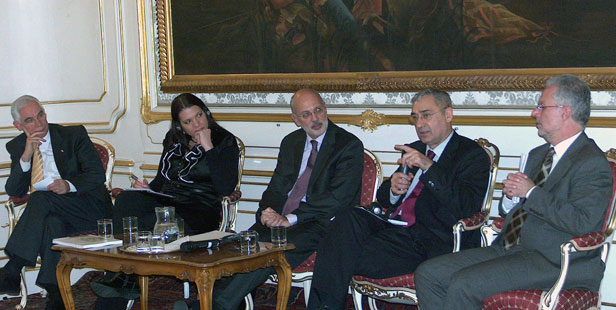 Current challenges of implementing national strategies aimed at the economic and social integration of Roma in European countries was the focus of a panel debate hosted by the Hungarian Mission to the United Nations in Vienna and moderated by UNIS Vienna Director Janos Tisovszky.

The event was organized on the margins of the visit to Vienna of the Hungarian Minister for Human Resources Zoltan Balog on 14 February 2013.

As a lead up to the panel debate Minister Balog gave a detailed overview of Hungary's current experience and efforts in implementing its own national Roma integration strategy through concrete initiatives and projects. The Minister highlighted the fact that the strategy followed the European Union framework on national Roma strategies by focusing on the four areas of education, employment, healthcare and housing prioritized in the European Union's framework for such national strategies. He also pointed out that Hungary added two additional priority areas: culture and crime prevention.

The Hungarian strategy was used as the starting point for panel members as they expanded and broadened the focus by looking at the sub-regional, regional and global aspects of the challenge of Roma integration and bridging the gap between policy declaration, strategy formulation and concrete developments on the ground.

Andrzej Mirga, a Senior Adviser on Roma and Sinti Issues for the Organization for Security and Cooperation in Europe (OSCE) stressed the need for real efforts to combat discrimination, hate crime and to protect Roma people from violence. He pointed to the importance of reliable data collection on the situation of the Roma, of having workable, usable data to properly assess the situation of the Roma and to initiate programmes and projects. He also noted the need to take a look at money already spent on programmes and projects and to assess outcomes.

Ioannis N. Dimitrakopoulos, a Head of Department of European Union Agency for Fundamental Rights highlighted the most recent study of the Agency done together with the United Nations Development Programme (UNDP) and the World Bank on the situation of the Roma in 11 EU countries with a significant Roma population. He noted that the results interestingly showed a similarity of exclusion patterns across the countries surveyed in spite of differences in the conditions of life and living standards of those countries. He noted that the Agency would repeat the survey twice: at the mid-term point and at the end of the Europe 2020 process providing robust comparable data that would assist the EU institutions and EU Member States in measuring progress.

The importance of identity and strengthening belief and pride in that identity was stressed by the Independent Expert on Minority issues of the UN Office of the High Commissioner for Human Rights, Rita Izsak as she also placed the Roma issue in a more global context -- both from a human rights and minority rights aspect but also as regards the presence of Roma minorities in non-European countries.

During the course of the debate Minister Balog stressed the need to address the Roma issue not simply from a human rights angle and from the perspective of the minority but also to consider the impact on the broader national development agenda affecting the social and economic well-being of the majority.