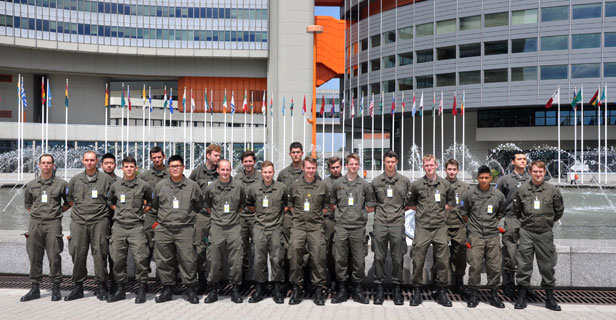 The International Day of United Nations Peacekeepers, which is celebrated every year on 29 May, is about paying tribute to the fallen peacekeepers-about 3,100 peacekeepers in the 65 years of history of UN peacekeeping have lost their lives on duty - to thank the 110,000 men and women who are serving as peacekeepers presently for their bravery, and to raise awareness about new developments and new challenges peacekeepers and peacekeeping faces in the field. The United Nations Information Service (UNIS) Vienna commemorated this year's Peacekeepers Day with three events in two of its client countries.

"On mission abroad it is never boring and you quickly learn how to wash your clothes yourself," Lieutenant-Colonel Karl Wolf joked on 28 May with a group of young Austrian cadets who are currently fulfilling their mandatory basic military service and who came to visit the UN on the occasion of the day. Lieutenant-Colonel Wolf, Deputy Commandant and Chief of Staff of the Austrian Armed Forces International Centre (AUTINT) joined the Austrian Armed Forces in the year 1984 and has served in several UN peacekeeping operations. The event's purpose was to bring UN Peacekeeping closer to a younger audience. The cadets were able to discuss with Lieutenant-Colonel Wolf the day-to-day business of serving in a peacekeeping mission. Prior to the discussion the cadets had the opportunity to participate in a guided tour of the Vienna International Centre (VIC) and learned about the basic facts of UN Peacekeeping from Public Information Officer Irene Höglinger-Neiva.

This year's Peacekeepers Day is dedicated to the theme "Adapting to new Challenges".  On 29 May, UNIS Director Janos Tisovszky gave a keynote speech at a conference marking ten years of Hungarian peacekeeping law enforcement in Afghanistan, which had been organized by the National University of Public Service in Budapest. Following the opening speeches of the Ambassador of Afghanistan to Hungary Najibullah Alikhil and Ambassador Lajos Bozi, from the Ministry of Foreign Affairs of Hungary, he highlighted new challenges in the field of peacekeeping and what the UN is doing to confront them. The UNIS Director noted that: "An evolution can be seen in the role of UN peacekeeping missions: they are moving towards multi-dimensional operations and there is an evident focus from monitoring to protecting civilians." Personal experiences and lessons learned were shared through a series of short briefings by the officers who returned from their mission. The event concluded with a ceremony honouring those who served in the mission with a special recognition from the Hungarian Minister of Interior.On 27 May, UNIS Vienna in cooperation with the Austrian Peacekeepers Association, hosted the launch of the publication "Humanitarian Assistance in Complex Emergencies - What Role for the Military?" The authors of the book, General Günther Greindl, Thomas Achleitner and Georg Ebner, gave a short insight into the book before the UNIS Director highlighted the significance of the International Day of UN Peacekeepers. The event finished with a presentation by Brigadier Brieger from the Austrian Ministry of Defence, who briefed the audience about current challenges in Austrian Peacekeeping operations including the very topical issue of the situation of Austrian blue helmets with UNDOF in the Golan Heights.

At all three events UNIS stressed the importance of honouring and appreciating peacekeepers around the whole world, recognizing their unique commitment and making a special reference to what UN Under-Secretary-General for Peacekeeping Operations Herve Ladsous' observation that: "the greatest asset to peacekeeping was the creative spark and extraordinary spirit that motivated those serving in peacekeeping operations."