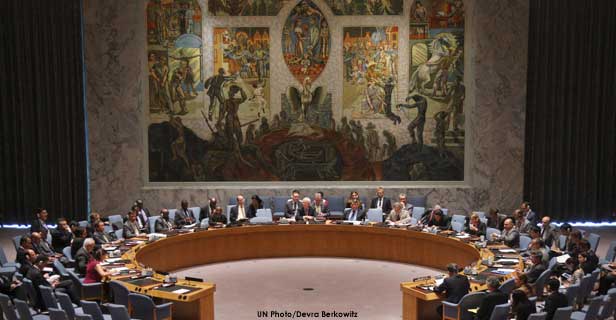 Amid heated discussions about how to resolve the situation in Syria, students from the Department of Political Science at the University of Vienna took part in a United Nations Security Council Simulation at the Vienna International Centre (VIC) on 25 June 2013.  The event organized by the university in cooperation with the United Nations Information Service (UNIS) in Vienna, was being held for the tenth time.

The United Nations Security Council Simulation is a part of the seminar "Conflict management of international organizations", attended by around 50 participants every year. Representing the different Member States of the Security Council, the students discussed the issue of the civil war in Syria. Organizing Professor Ingfrid Schütz-Müller acted in the role of Secretary-General, while Klaus Billand chaired the meeting as President of the Security Council. Staff from the United Nations Industrial Development Organization (UNIDO) and the International Atomic Energy Agency (IAEA) also participated in the simulation.

Throughout the day the students were having heated discussions, trying to agree on a resolution on the Syrian conflict. Although the task was difficult, they still enjoyed it: "This was the most exciting seminar of the Bachelor Programme," said one of the participants.

After long negotiations the students expressed their deep concern about the situation in Syria and encouraged all parties involved in the Syrian civil war to join a ceasefire from 25 July  onwards, stop any kind of arm conflict and promote further peace negotiations in Geneva. Moreover, they welcomed further cooperation of the international community to support the restoration of the rule of law as well as the maintenance of human rights according to the UN Declaration of Human Rights.

Such a realistic experience of international politics left the students motivated and very interested in engaging more with UN topics. "The students could have kept on with their discussions  forever," said Professor Schütz-Müller after the successful event.