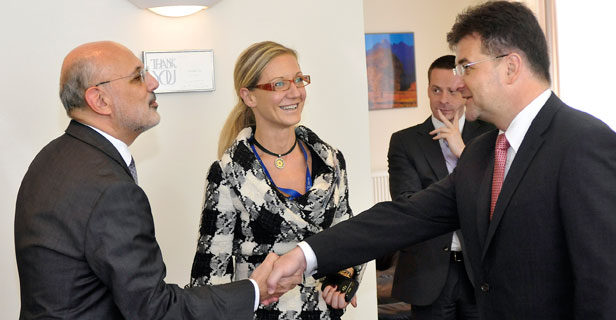 Staff from the United Nations Information Service Vienna was also on hand to engage with the Slovak public at the Open House Day of the Ministry of Foreign and European Affairs in Bratislava on 25 May 2013. The Ministry opened its doors at 10am to welcome a steady stream of visitors ranging from toddlers with their parents to retirees offering a diverse programme spread out over the premises of the Ministry including the courtyard as well as in the nearby Congress Hall and the historic Palugyay Palace.

Around one thousand visitors took advantage of the opportunity to see the Ministry´s offices, to meet and greet Minister Miroslav Lajčák and to gain information from numerous stands presenting the work of the Ministry including development assistance and disarmament as well as its cooperation at the regional and international levels.

The UN information stand offered handouts, leaflets and brochures on the activities of the United Nations worldwide, the work of Vienna based organizations as well as the mandate and work of the UN Information Service in Vienna. Specially designed badges for the Day as well as pens and "UN friend" bracelets were in high demand and distributed to those who took time to fill out the My World Survey on the main of concern for themselves and their families for 2015 and beyond..

Many people - and not just young people - were interested in career opportunities at the United Nations. Listing all the possible ways to enter the UN workforce including the Volunteer Programme, the UNIS team also highlighted the YPP exams open for Slovakia yearly since 2011 as well as the UN Virtual Career Fair held online on 29 May.

UNIS tour guide Romana Kropilová talked about guided tours offered by UNIS Vienna - in the Slovak language -- and raising the interest of many visitors and inspiring them to come to Bratislava´s closest UN headquarters´ in Vienna.

Taking a photograph with the life-size cut out of UN Secretary-General Ban Ki-moon was a a popular attraction with the hundreds of visitors coming past the UN information centre stand..

Monika Satková, Secretary-General of the renewed Slovak UN Association was presenting the mission and objectives of the UNA and campaigning to increase its membership.

As well as the Foreign Minister Lajčák, the State Secretary Peter Burian and Director General Roman Bužek came to visit the UN information stand while. Ambassador Oľga Algayerová, Slovakia's Permanent representative to the United Nations in Vienna as well as Director Denisa Frelichová, of the Ministry's UN Department were present to talk to visitors about Slovakia's work within the United Nations - looking back on 20 years of activities as this year Slovakia marks its 20 th anniversary of independence and 20 th anniversary of its UN membership..

To mark the special anniversary occasion and use the public attention of the Open House Day, UNIS Director Janos Tisovszky was at the information stand to launch a special Slovak language web portal for students and teachers on "Teaching about the United Nations".