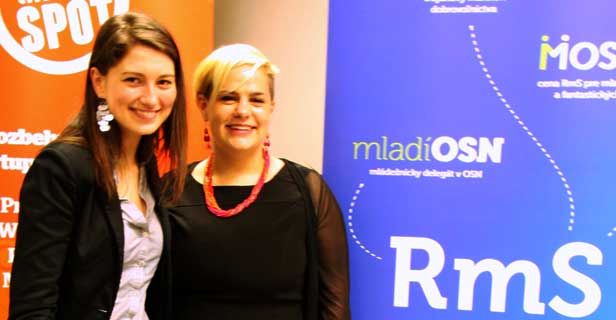 HANA SKLAJRSZKA is the new Slovak UN Youth Delegate who will be going to the UN´s headquarters in New York in October 2013, to give a speech to the 3rd Committee at the UN General Assembly, as part of the Slovak official delegation and to work with young Slovaks throughout the year.

Hana was chosen out of six finalists ( Patrik Èakloš, Martin Hužv ár, Simona Perejdová, Dean Reš and Natália Šubrtová) in the final round of the selection process, held on Friday 7 June in Bratislava in the premises of The Spot co-working centre, by a jury consisting of representatives of the Youth Council of Slovakia (RMS) - Director Ondrej Gallo and coordinator of the programme Katarína Mrázková;  Soòa Danová of the Human Rights Department of the Ministry of Foreign and European Affairs ; Mária Bošòáková of the Youth and Children Department of th e Ministry of Education, Science, Research and Sport; Milena Dudášová, Un Youth Delegate 2012; and Jana Hönschová, consultant of UNIS Vienna.

At the beginning, each of the finalists presented in Slovak their story, theme and mission for the next year as the UN Youth Delegate, which was followed by a Q&A session as well as short interviews in English.

While promoting the work of the United Nations , Hana would like to reach out to young people at secondary schools and universities in Slovakia and to teach them critical thinking - to discuss, to argue and form their own opinion based on evaluation of different points of view. Hana studies at the Faculty of Social Studies at Masaryk University in Brno, Czech Republic, focusing on conflict studies, cultural sociology and sociology of migration.

The programme of the UN Youth Delegate has been administered by the Youth Council of Slovakia (RMS) since 2006 and for three years in cooperation and support of UNIS Vienna..