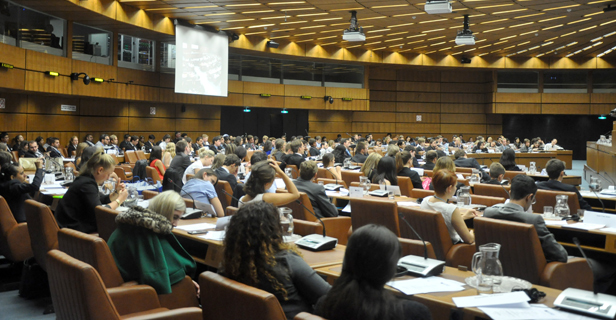 Organized by the United Nations Youth and Student Association of Austria-Academic Forum of Foreign Affairs with the support of UNIS Vienna and hosted by the United Nations Office at Vienna (UNOV), the Vienna International Model United Nations (VIMUN) 2013 took place from 11 - 15 August in the Vienna International Centre (VIC). VIMUN has been organized annually since 1995 and every year up to 250 students and young graduates from around 40 different nations participate in the simulation.  The fact that VIMUN conference entirely takes place at a United Nations headquarters makes it perhaps one of the most authentic MUN worldwide.

The conference was opened by Michael Pfeifer - President of the United Nations Youth and Student Association of Austria - Academic Forum for Foreign Affairs, Mathias Hörlesberger -  Secretary General of the Vienna International Model United Nations 2013 and Irene Höglinger-Neiva from the United Nations Information Service (UNIS) in Vienna. In his welcoming speech Mr. Pfeifer emphasized the importance of Models United Nations worldwide and the role of young people in resolving global problems such as high unemployment, environmental issues and drugs use.  He encouraged the participants to be involved in the political debates concerning these topics not only during the VIMUN, but also in their own countries afterwards.

After a wonderful performance of a part of Mozart's famous "Divertimento" by the Paneuropa Quartett, Ms. Höglinger-Neiva presented a video message from the UN Secretary General's Envoy on Youth - Ahmad Alhendawi. In his message Mr.  Alhendawi congratulated the VIMUN participants for their commitment and interest in learning more about the work of the United Nations.  Moreover, as the opening of VIMUN was on the same date as the International Youth Day, he addressed the issue of the high unemployment rate of young people all over the world.  He said that resolving this problem is a high priority for the United Nations and that "nothing for youth should ever be done without youth involvement".  He emphasized that Models United Nations are the right environment for obtaining skills, which will help young people be involved in the process of changing the current global political and economic situation.

During the four days students and young graduates put their diplomatic skills to the test and discussed issues ranging from human rights to the current European debt crisis. Apart from simulating the UN Security Council action on a political crisis, the main areas of work included the relevance of human rights in the 21st century, illicit trafficking of nuclear materials, prevalence of the use of alcohol, the sovereign debt crisis and local topics.

In the closing ceremony this year's "VIMUN Best Delegate" prize winners were announced. UNIS Director Janos Tisovszky officially closed the conference and congratulated the participants for their energy, commitment and motivation during the VIMUN 2013.

VIMUN is part of a worldwide series of Model United Nations meetings, which give participants the possibility to gain firsthand experience and knowledge concerning the structure of the UN and the procedures it follows and helps them obtain very important skills for their further career development such as leadership skills, research, writing, public speaking and problem solving skills.