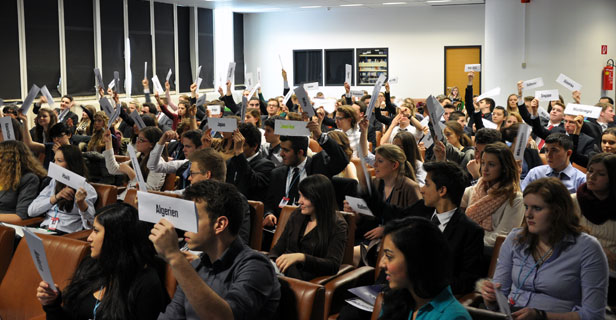 More than 140 students from 13 high schools in Vienna, Lower Austria and Istanbul participated in the Vienna Schools' Model United Nations (VSMUN) which took place from 11 to 13 February 2013 at the Vienna International Centre (VIC). The VSMUN was organized by Daniel Resch from Gecko events agency and Sonja Graf, the initiator of the school project, with the support of the United Nations Information Service (UNIS) Vienna which hosted the event for the fourth time.

After opening remarks by UNIS Public Information Officer Irene Hoeglinger-Neiva and Hannelore Pawlitschek from the Permanent Mission of Austria to the United Nations in Vienna, the students were invited to begin the simulation of a UN General Assembly session.

During the three days young people had a first-hand possibility to practise their diplomatic skills while negotiating a range of topical issues. With this in mind the participants took on the role of delegates from different countries and formed ten committees. So the students had a chance to be in the shoes of high-ranking officials.

The topics that were the conference's focus occupy a central place on the current UN agenda: sustainable development, climate change, combating disease and demographical changes. After discussions in small groups the "delegates" drafted several resolutions which reflected their constructive intergovernmental compromises. In this way the participants have carried out a complex simulation of a General Assembly session. In the process the students could understand what it is like to be negotiating on behalf of a Member State that they represented.

The wide range of social, political and economic questions that are covered within the framework of the United Nations will hopefully serve as a solid basis for the students in their future endeavours to respond to today's acute global challenges.