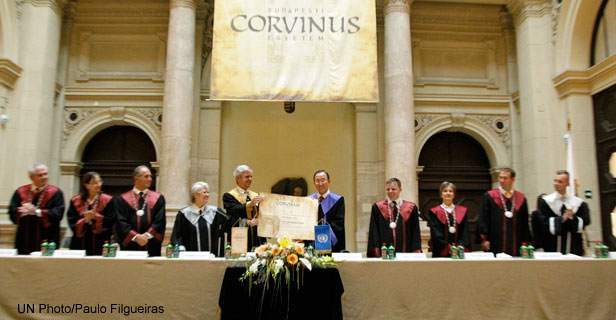 It was a tight schedule for UN Secretary-General Ban Ki-moon, who arrived for a visit to Hungary on 8 th October. While he was due to speak at the opening of the Budapest Water Summit (BWS), he also had many bilateral meetings in the Hungarian capital.

Soon after his arrival, the Secretary-General had a working lunch with Hungarian President János Áder at the Castle Hill. The Secretary-General thanked President Áder for organizing the Water Summit and they discussed Hungary's role as the co-chair of the General Assembly Open Working Group on Sustainable Developments Goals in helping to shape the international community's efforts towards a sustainable future. Despite the tight schedule the Secretary-General could enjoy the breathtaking view of Budapest from the President's residence.

Then they went together to the opening of the Budapest Water Summit. There, in his speech, the UN Secretary-General emphasized that water is the key to sustainable development:  "Water and sanitation are obviously central to our efforts to achieve the Millennium Development Goals and must figure prominently in the post-2015 development agenda … Our societies cannot prosper without clean, plentiful freshwater. People cannot thrive without adequate sanitation." Joint action is needed to guarantee a water secure world, he said.

At the press encounter with Ban Ki-moon and President Áder, following the summit opening, the Secretary-General announced his plans for a summit on climate change in September next year, and invited Mr Áder to the event. The Secretary-General told the journalists: "I am very much grateful to the Hungarian government and people for their strong commitment and partnership they have been showing to work together with the United Nations to make our world better for all."

The meetings then switched from the hilly Buda-side of the River Danube to Pest, where Mr Ban met the Prime Minister of Hungary, Viktor Orbán in his office in the Hungarian Parliament on the bank of the river. During their meeting they touched on the Budapest Water Summit and discussed its importance for addressing water and sanitation issues with global, broad-based participation. And they also discussed Hungary's domestic agenda as well as economic developments in Europe. The Secretary-General encouraged Hungary to continue to engage with UN human rights mechanisms.

Further downstream, on the premises of the renown Corvinus University of Budapest, the Secretary-General has received a Honorary Doctorate. He earned great applause when he greeted the audience in Hungarian, by saying "Nagyon köszönöm, hogy Közgázos lehetek!" [Thank you very much for letting me become a student of Közgáz (informal name of the University)]. In his speech Mr Ban pointed out that the University's aim is to create a better world: "I urge all of you to remember that you are not just citizens of Hungary, you are citizens of the world.  Get involved.  Turn your passion into compassion for our world. Be a global citizen. Help us foster peace among people and harmony with our planet." He closed his speech with a quote from the Hungarian poet Attila József: "To settle at last our communal affairs, remains our task -- and none too small it is."

After a working dinner with the Hungarian Minister of Foreign Affairs, the Secretary-General attended a gala concert at the Palace of Arts Budapest on the occasion of the Budapest World Water Summit. What else could the theme of the concert be - but water - so the guests enjoyed Strauss' Blue Danube Waltz, Handel's Water Music and Smetana's The Moldau amongst other pieces.