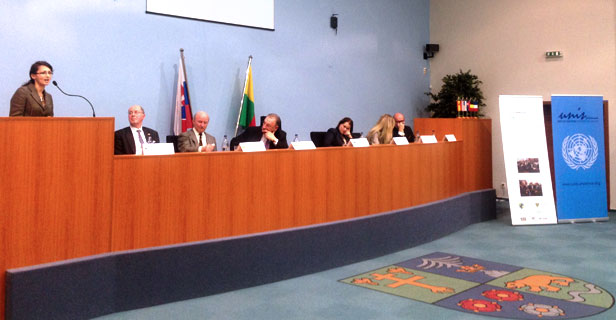 About 70 high schools students from Slovakia, France, Belgium, Netherlands, Czech Republic and Hungary, as well as international students based in Slovakia met for the second year session of the Žilina Model United Nations Conference in Žilina, Northern Slovakia, in the building of the Office of the Žilina self-governing region from 10 - 12 April 2013.

Keynote speakers at the opening ceremony on 10 April were Ambassador of the United States Theodore Sedgwick; Ambassador of Belgium Walter Lion; Ambassador of Spain Félix Valdés y Valentín-Gamazo; First Advisor to the French Ambassador Helène Roos; Director of the Department of the United Nations and International Organizations at the Ministry of Foreign Affairs Denisa Frelichová; President of the Žilina self-governing region Juraj Blanár; President of the Slovak Atlantic Commission Rastislav Káčer; Chief of  the Department of Education of the Žilina District Office Dana Čuláková, and Secretary-General of ZAMUN 2013 Peter Kocian. UNIS Vienna was represented through the virtual presence of Director of UNIS Vienna János Tisovszky via a  video message, introduced by UNIS Vienna consultant Jana Hönschová.

Ambassador Sedgwick encouraged the delegates of ZAMUN 2013 to see themselves as architects of a better world and that the international community would not be able to protect peace and security without the United Nations. Director Frelichová reminded everyone that there have been several significant Slovak nationals involved in the work of the UN since its founding and stressed that the Organization can be only as strong and effective as the Member States make it. The Slovak UN Youth Delegate 2012/2013 Milena Dudášová made an appeal not to overlook the enriching and innovative potential of young people.

The Žilina Model United Nations Conference ZAMUN 2013 was organized by students of the bilingual high school in Žilina, in cooperation with the town of Žilina, Žilina self-governing region and UNIS Vienna.