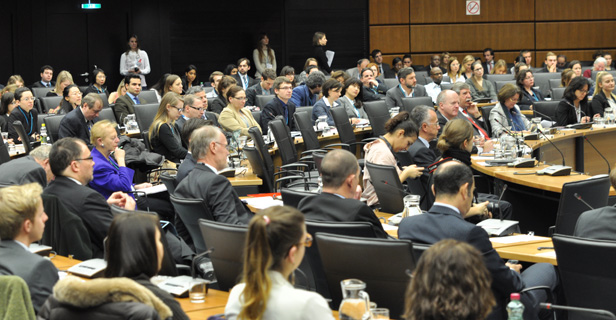 "The UN's changing realities in focus at ACUNS conference"

The evolution of UN policies over the past 20 years was the focus of the 2014 the Academic Council on the United Nations System (ACUNS) Vienna Annual Conference, which took place from 14-17 January in the Vienna International Centre (VIC). The United Nations Office on Drugs and Crime (UNODC), the United Nations Industrial Development Organization (UNIDO), the Preparatory Commission for the Comprehensive Nuclear-Test-Ban Treaty Organization (CTBTO) and the International Atomic Energy Agency (IAEA) presented their changed policies, shedding light on how they have adapted to respond to changing realities and evaluating if current challenges are being met effectively.

The area of youth policies has experienced particularly dramatic change in the last two decades. After a long time of ignoring the crucial role of young people in shaping our society's present and future, its significance has eventually been recognised. The Secretary-General's decision to appoint Ahmad Alhendawi as the first-ever Envoy on Youth reflects the United Nations' commitment to make youth engagement one of its key priorities. So it does not come as a surprise that the third day of the ACUNS conference was dedicated to youth. After the Special Envoy on Youth addressed the participants of the conference in a video message, representatives of UNESCO, (United Nations Educational, Scientific and Cultural Organization), UNIDO, UNODC, UESF (United for Education and Sustainable Futures), the ACUNS Vienna Liaison Office and the Saint Petersburg State Medical University as well as the Austrian Youth Delegate to the UN General Assembly elaborated on "The evolution of youth policies and practical examples" during a panel discussion moderated by UNIS Vienna Director Janos Tisovszky. The discussion was followed by an interactive Q&A session, giving the predominantly young audience the opportunity to address the experts directly.

The panellists unanimously agreed that young people's innovative approach, their sense of responsibility as well as their technological savvy represent resources indispensable to successfully tackle the challenges that lie ahead of us.

On 17 January 2014, the third day of the ACUNS conference at the Vienna International Centre (VIC), the fourth and final session of the 2013-2014 Regional Academy on the United Nations (RAUN) took place. The RAUN, a mobile academy first launched in January 2012, is hosted by ACUNS, the Comprehensive Nuclear-Test-Ban Treaty Organisation (CTBTO), the United Nations Information Service (UNIS) Vienna and the Diplomatic Academy of Vienna. The RAUN's aim is to equip the next generation of leaders and policy makers with profound knowledge and the tools needed to face the global challenges of the 21 st century.

The 43 participants, Bachelor and Master students of international relations, law, economics and related fields from five different countries (Austria, Czech Republic, Hungary, Serbia and Slovenia) presented their research papers, which covered a broad range of topics from the three core areas of international development, security and human rights. The presentations were followed by a panel discussion, giving the students the opportunity to receive feedback from the judges evaluating their papers and to address questions raised by the jury, thus clarifying their position. Each participant received a certificate of successful completion from the UNIS Vienna Director Janos Tisovszky and ACUNS Executive Director Alistair Edgar. Groups with exceptional papers as well as individual participants who had shown outstanding performance received special awards.

The young participants' commitment, passion and enthusiasm were essential to RAUN's success. If these young people are to shape our future, rest assured that it will be a bright one.