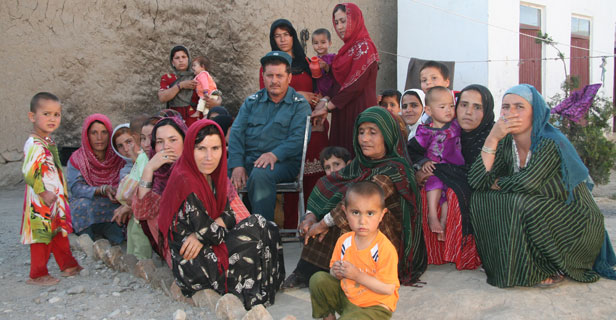 No Burqas behind bars

"I feel more free in prison that outside of it." Most of us would struggle with the notion of anyone preferring imprisonment over liberty. But knowing that this was stated by an Afghan woman who was sentenced to several years in prison because she ran away from her violent husband, it does not seem so ludicrous any more.

Nima Sarvestani's documentary "No Burqas behind bars" depicts the live of Afghan women in Takhar prison, where they serve long-term sentences of up to 20 years for "moral crimes" such as fleeing forced marriages or abusive husbands and relatives.  Many of them are incarcerated simply for running away, which is not punishable even under the Afghan penal code.

Despite poor prison conditions, it is within the prison walls that these women feel most secure and free. They can move around freely, open up to other inmates who have endured similar hardships and draw strength from each other. Although their decision to no longer tolerate constant physical and verbal abuse landed them in prison, they are proud of themselves for escaping the vicious cycle of victimhood that many women are trapped in. The women's stories are deeply compelling and a testament to the strength and dignity of the human will, in the face of appalling conditions.

"No Burqas behind bars" was screened on 10 March 2014 as part of the monthly film screenings by Ciné-ONU Vienna, organised by the United Nations Information Service (UNIS) Vienna in cooperation with this human world (THW) Film Festival and Topkino. The screening celebrated International Women's Day, which is marked on 8 March every year.

The panel discussion following the screening featured Barbara Stelmaszek, Project and Network Coordinator with Women Against Violence Europe (WAVE), and Elizabeth Mattfeld, Project Coordinator at the United Nations Office on Drugs and Crime (UNODC) with Anne Thomas, Deputy to the Director of the United Nations Information Service (UNIS) Vienna, as the moderator.

Elizabeth Mattfeld who is responsible for a UNODC project providing treatment for drug users in Afghanistan, knows that in patriarchal societies such as in Afghanistan women face even more difficulties in overcoming addiction. Drug abuse is heavily stigmatized, so women do not always seek drug treatment voluntarily and sometimes male family members remove women from rehabilitation centres much too early or as soon as they find a man willing to marry them.

Ms. Stelmaszek pointed out that Afghan women imprisoned for moral crimes are survivors of violence punished for fighting back. She highlighted the importance of providing services to women after they leave prison. Having "tarnished" their family's honour, women are not accepted back into their families and can only hope of finding refuge in a women's shelter. But safe houses, in short supply everywhere around the world, are especially so in Afghanistan.

With foreign troops pulling out of the country many fear a negative impact on the fragile achievements in the realm of women's rights. Laws protecting women from domestic violence do exist, but due to deeply entrenched cultural values and traditions most perpetrators enjoy impunity from persecution.

Despite recent comments by the new European Union Ambassador to Afghanistan that Afghanistan still remains one of the worst places in the world to be a woman, the panellists concluded that progress has been made. They remain optimistic that women will prevail in their battle for a better future for themselves and coming generations.