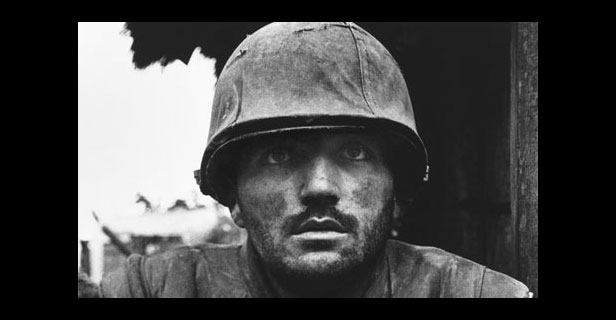 "I have got to make sure that when they look at my pictures on a Sunday morning after breakfast, that it's going to hit them hard." This is how Don McCullin, one of the world's most renowned living war photographers, once described the purpose of his photography.

The documentary "McCullin" shows his three-decade-long career covering wars and humanitarian disasters on every continent and the images that often captured historic moments. From 1969 to 1984, he was the Sunday Times of London's star photographer, where he covered stories from the civil war in Cyprus to the war in Vietnam, from the man-made famine in Biafra to the plight of the homeless in the London of the swinging sixties.

McCullin's pictures "hit you hard, " offering grim reminders of man's inhumanity to man. Today with "the rule book having been rewritten," newspaper editors would not publish pictures revealing the truth with such brutal candour. Watching the movie, one realizes that the job takes a remarkable physical and emotional toll on photographers. In the movie, the photographer recalls the many battles he fought within his own mind and how - despite his love for photography -  his dark room has become a haunted place.

"McCullin" was screened on 28 April 2014 as part of the monthly film screenings by Ciné-ONU Vienna, organised by the United Nations Information Service (UNIS) Vienna in cooperation with this human world (THW) Film Festival and Topkino. The screening celebrated World Press Freedom Day, observed annually on 3 May.

The panel discussion following the film screening featured the Deputy Secretary-General of the Austrian Commission for UNESCO, Mona Mairitsch, war correspondent Petra Ramsauer and the Acting Director of UNIS Vienna, Martin Nesirky, as the moderator.

The panellists, focusing on the safety of journalists, unanimously confirmed that today the number of casualties among journalists covering human rights violations, corruption or other illegal activities by far exceeds the number killed in conflict regions. Ms. Mairitsch said that, according to UNESCO, more than 600 journalists and media workers have been killed in the last ten years. To put an end to violence against journalists, the United Nations has developed the "UN Plan of Action on the Safety of Journalists and the Issue of Impunity. " Its aim is to achieve a safe and free work environment for journalists and media workers and protect freedom of expression. Referring to the recent killing of a female Associated Press war photographer in Afghanistan, Petra Ramsauer said she was certain that this was a deliberate attack aimed at intimidating western journalists and in particular women journalists.

The panellists also touched upon whether war photography needs to be justified and whether presenting people with unsettling pictures from war does any good. Again they agreed that images have the power to galvanize change. They are indeed painful, they go into your heart and they might even keep you up at night, but that's exactly what they should do.