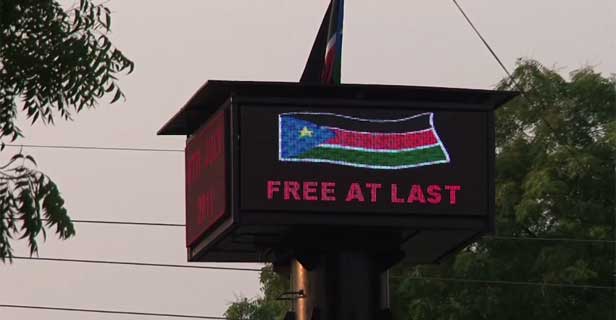 Film screening for the International Day of United Nations Peacekeepers

"Everything is to be invented from scratch, starting with national identity"

In 2011, the Republic of South Sudan became the world's newest nation. After a 50-year civil war, which killed more than 2 million people, the stakes and the hopes are high. But how do you go about building a country from scratch? The film 'State Builders' follows a determined UN official, Lise Grande and the country's newly appointed Vice President, Riek Machar, as they attempt to put theory into practice to shape the young democracy.

The film portrays the steps to be taken to build a state from scratch, with some internal rivalry, between the Vice-President and the President himself. The complications shown at the beginning of the film reveal a tremendous sense of uncertainty. The new State faces challenges in various fields such as education (42 per cent of civil servants only have primary school education), the economy (only 12 per cent of the population are paid employees), finance (only 1 per cent of households have a bank account) and health (only one quarter of all people have access to health services).

Watching the film you realize that security and stability are core functions in state building. This might not seem easy to achieve, but it is certainly possible. The audience has the chance to witness the birth of a new nation, fully supported by the international community as evidenced by the film. It depicts not only the involvement of the international community in terms of political support but also the practical work with its structures, kits and procedures.

"State Builders" was screened on 19 May 2014 as part of the monthly film screenings by Ciné-ONU Vienna, organised by the United Nations Information Service (UNIS) Vienna in cooperation with this human world (THW) Film Festival and Topkino. The screening marked International Day of United Nations Peacekeepers on 29 May.

The panel discussion following the film screening featured Beatrix Attinger Colijn, who has extensive experience in the field of UN peacekeeping missions, the Team leader Africa/Deputy Head of Programmes for Austrian Red Cross (AutRC), Barbara Busch, the President of the Austrian Peacekeepers Association, General (ret.) Günther Greindl, and the Acting Director of UNIS Vienna, Martin Nesirky, as the moderator.

Ms. Attinger Colijn stressed the unique character of the state building mission in South Sudan, emphasizing that it is a country which needs to establish its own identity, every state is different and the European model of democracy might not be the right solution for the newborn state. Ms. Busch talked about challenges the Austrian Red Cross is facing, mentioning the huge gap between the needs of the people, in terms of drinking water, food, hospitals and the capacity of the Red Cross to help the people of South Sudan. The Red Cross is trying to help its South Sudanese partner to become stronger while at the same time providing some of the services needed. According to Ms. Busch it is almost impossible to do both at the same time, however she sees the South Sudanese people as the key to make the change happen. General Greindl referred to the protection of civilians as being a very new field in Peacekeeping. Since the 1990s the United Nations has developed an elaborate system to handle crises, concentrating on three main components: peacemaking, peacekeeping and peacebuilding, all of which were well represented in the film.

The concluding message from the ' State Builders' film: building a long-lasting, secure and stable state, means building on the strengths already in the country by listening to and learning from the people.