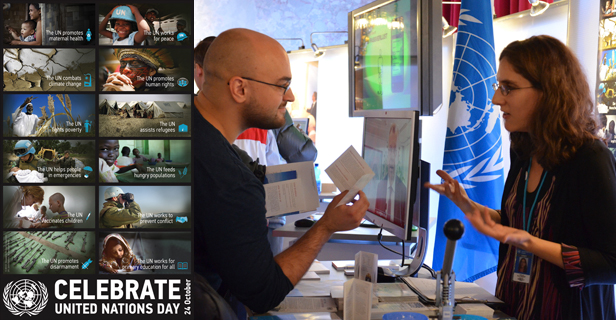 To showcase the work and priorities of the United Nations and mark UN Day 2014, UNIS Vienna organized the following activities:

On 16 October 2014, children at the American International School in Vienna, together with their parents and UN Staff celebrated UN Day by wearing national clothes and performing traditional dances in representation of their home countries, as well as a generation of multicultural and multilingual individuals. The UNIS information stand was the main attraction point for children, where they were invited to make their own special UN day badges and learn more about the work of the organization, in particular its role in standing up for children's rights. More...

UNIS Vienna Director Martin Nesirky travelled to Ljubljana, Slovenia, to deliver a speech at a ceremony held on 23 October in honour of UN Day organized by the UNA Slovenia. In front of an audience of around 40 people including laureates, their families and Milan Brglez, President of the National Assembly of Slovenia, he praised the research work of ten students who dedicated their diploma, master and doctoral theses to the work of the United Nations. Martin Nesirky highlighted in his speech the challenges today's world is facing and the approaches the UN takes in tackling them. Photos from the event

Shadowing Programme 2014 at the UN in Vienna

"Take a look at how the UN works from the inside and decide whether it's something for you," said Martin Nesirky, Director of UNIS Vienna when launching this year's "Shadowing Programme" to mark UN Day 2014. The programme gives 81 students from 15 different universities in Hungary, Slovakia, Slovenia, Austria the possibility to "shadow" 47 UN staff members throughout the course of one day, between 24 October and 24 November 2014 at different Vienna-based UN organizations. The students have a chance to experience how different UN employees, from security guards, interpreters and laboratory technicians, to legal officers, public information officers and many more, work every day. Furthermore, UNIS Vienna offers a guided tour and career workshop for all the participating students to give them an idea of the different career options within the organization and how the UN works.

On the occasion of Austrian National Day, celebrated each year on 26 October, the Austrian Foreign Ministry opened its doors to all the citizens and visitors who wanted to take a look "behind the scenes" of the country's foreign affairs and diplomacy. Around 5,000 people from Austria and all over the world participated.

UNIS Vienna joined the event to mark UN Day 2014 with an information stand to show visitors the work of Vienna-based UN organizations and their impact on our everyday lives. The event gave visitors the opportunity to ask a wide range of questions about subjects ranging from UN internships to global politics, to learn more about the possibility of guided tours at the Vienna International Centre, as well as UN-themed entertainment for younger visitors, who enjoyed making their own UN badges. Short Video clip 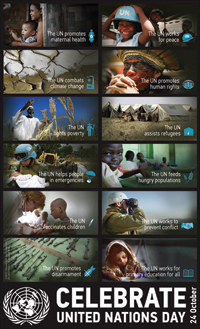