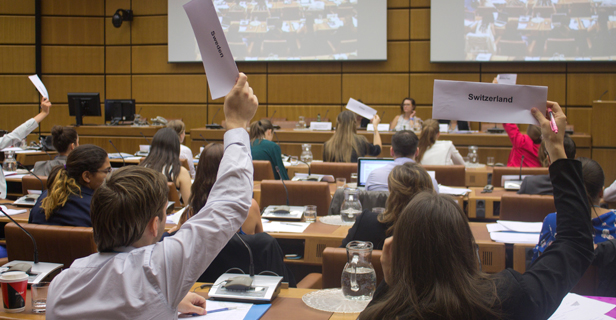 More than 270 students from about 50 nations gathered at the Vienna International Centre (VIC) from 3 - 7 August for the 20 th anniversary of Vienna International Model United Nations (VIMUN), an annual event made all the more realistic because it is held at one of the four global headquarters of the UN. During the conference participants simulated sessions of seven UN bodies to gain a better understanding of UN debates, to improve negotiation skills and to come up with their own creative solutions for global problems and conflicts. By having to represent different nations in the discussions, the delegates were able to experience how difficult it is to achieve agreements among the huge variety of opinions and interests within the United Nations family.

In addition to taking place at the UN's Vienna headquarters, VIMUN 2014 was special in  other ways: For the first time in the conference's history, a Media Simulation Committee covered the event. Five young journalists - representing Al Jazeera, El País, Fox News, Le Monde Diplomatique and The New York Times - provided a unique overview of the entire conference by constantly reporting about the committee discussions, the opinions of the delegates and the social events on the media team's website www.modelun-news.org.

Furthermore, for the first time, simultaneous interpretation was provided at the opening and at the closing ceremony by young interpreters. Their efforts made it possible for the delegates to listen to the speeches in languages such as French, German, Russian and Spanish - just like in authentic UN conferences.

The conference was opened by the Acting Director of the United Nations Information Service (UNIS) in Vienna, Martin Nesirky, the President of the United Nations Youth and Student Association of Austria (UNYSA), Michael Pfeifer, and VIMUN's Secretary-General Johannes Tropper who reminded us that: "What you are going to debate here is not going to change the world. It will not have any direct impact and it is, after all, a game. It is up to you to use the skills you acquire here to really make an impact out there." For many of us, this was both a realistic and inspiring starting point.

During the conference the delegates debated enthusiastically and sought  to come up with resolutions in their committees. While the members of the Human Rights Council (HRC) discussed the treatment of migrants, refugees and asylum-seekers, the United Nations Office on Drugs and Crime (UNODC) was addressing the legalization of soft drugs. The International Atomic Energy Agency (IAEA) was heatedly debating ways to manage severe nuclear accidents, while the conflict in Iraq and its implications for international security was the topic of the Security Council. Delegates in the Economic and Social Council (ECOSOC) were looking for possibilities to guarantee access for all to sustainable energy. In a high-level debate the judges of the International Court of Justice (ICJ) focused on a dispute between Timor-Leste and Australia about the seizure and detention of important documents and data.

Many found the three days of active discussions , thrilling,  inspiring, at times stressful and always full of great chats with people from all over the world. "I already miss coming here every day", said Jasmin Ziegelbecker, coordinator of the media team.

UNIS Vienna has been a partner and sponsor of VIMUN since its first days, enabling the UNYSA to hold VIMUN at the Vienna headquarters, making it one of the most authentic MUNs worldwide. 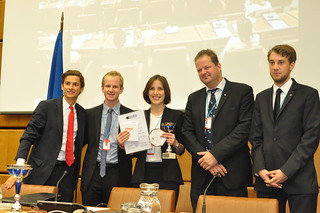