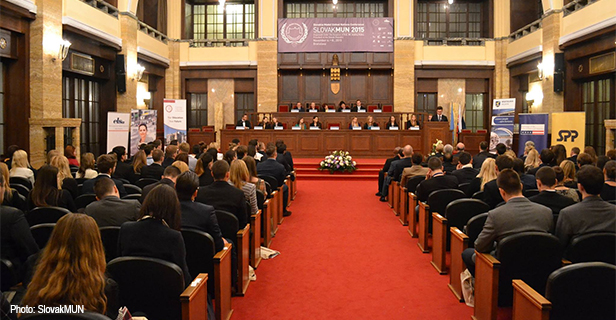 BRATISLAVA, 8 November 2015 - The very first University Model United Nations - SlovakMUN 2015 - held its discussions in the same hall of the historical National Council building, visited last month by UN Secretary-General Ban Ki-moon.  On that visit in October on the occasion of the 70 th anniversary of the United Nations, Secretary-General Ban Ki-moon specifically praised the SlovakMUN and noted that there is a proud tradition of similar MUN conferences in Slovakia.

Organized by students of the Comenius University, SlovakMUN 2015 was held in the premises of the Comenius University and the historical building of the National Council from 4 to 8 November 2015. SlovakMUN participants focused on the security situation in Ukraine (NATO committee), peacekeeping operations (Security Council), bioethical borders in medical research (International Bioethics Committee), cyberwarfare and its impact on the international security (DISEC - Disarmament and International Security Committee),  implementation of diplomatic competencies by officials on missions in post war and developing countries (Legal Committee ); and on energy security in Europe (Economic and Social Council).  There were about 90 participants from Australia, Austria, Brazil, Croatia, Czech Republic, France, Germany, Greece, Hungary, Poland, Russia, Serbia, Singapore, Slovakia, Spain, Switzerland and Ukraine.

In his speech entitled "A new generation of the UN", SlovakMUN Secretary-General Pavol Krajčí noted that there is an opportunity to change the world today and he encouraged young participants to take it.

Martin Nesirky, Director of United Nations Information Service of Vienna stressed that young people under the age of 25 constitute more than forty per cent of the global population, which is both an unprecedented opportunity for development and a huge challenge. Eighty-seven per cent of young people live in developing countries, and their opportunity to be engaged, especially for those living in conflict areas are severely limited.

Mr. Nesirky pointed out that during his visit to Slovakia in October 2015, the UN Secretary-General encouraged MUN participants to cooperate and support each other as well as to join the UNA Slovakia Association as another way to support the ideals and aims of the United Nations.

The first SlovakMUN was organized under the auspices of Slovak President Andrej Kiska, with support of UNIS Vienna.