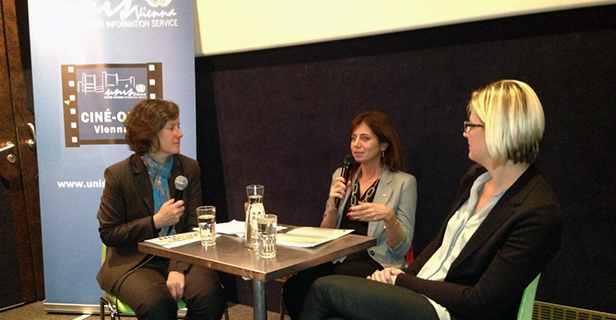 Music can heal not only our soul, but it can show the way out of helplessness, even if it is played with instruments made from rubbish. This was the message of the Cine-ONU Vienna screening of "Landfill Harmonic" - a film about the 'transformative power of music'.

The film is a documentary directed by Brad Allgood and Graham Townsley which tells the story of a Paraguayan musical youth group of children, who play music with instruments made entirely out of rubbish. The story develops in one of the poorest slums in Latin America called "Cateura", where people live in and from rubbish and have no escape from their situation. A few years ago, one of the rubbish pickers, 'Cola', got together with local musician Favio Chávez to make instruments for the children of the slum. With children like Ada and Tania and with the support of many in the slum, Favio slowly put together one of the world's most unlikely orchestras. Their first concert abroad was in Brazil, at the United Nations Rio+20 conference in 2012. After this concert their story went viral and the orchestra was catapulted into the global spotlight. They even played with the heavy metal band Metallica. However, when a natural disaster devastated their community, the orchestra provided a source of hope for the town. In the end we could see how playing with the orchestra changed the lives of the children. "My life would be worthless without music," said Tania, one of the violinists. Music built hopes and it built bridges among those who were in need.

The film was followed by a panel discussion with Angelika Losek, Managing Director of Superar Austria and Ranya Nehmeh, Human Resources Officer of the OPEC Fund for International Development (OFID) which is a key funders of Superar. The discussion was moderated by Anne Thomas, Deputy to the Director of the United Nations Information Service (UNIS) Vienna. Angelika Losek explained the work of Superar, which has a similar story to the Landfill Harmonic: "We try to give the children who lack opportunities a chance,". She also said that music can help children in many ways, it makes them more self-confident: "Achieving something gives them power and creativity and helps them to cope better with any problems." Ranya Nehmeh mentioned that OFID was also one of the first partners of Superar Austria and also funds similar projects aimed at empowering young people all over the world. She added that all of their projects include elements related to achieving the Sustainable Development Goals. At the end of the discussion, Ranya Nehmeh outlined why OFID contributes to these kinds of projects, and her words reveals the real message of the film too: "We believe that with music you can change the development of a child."