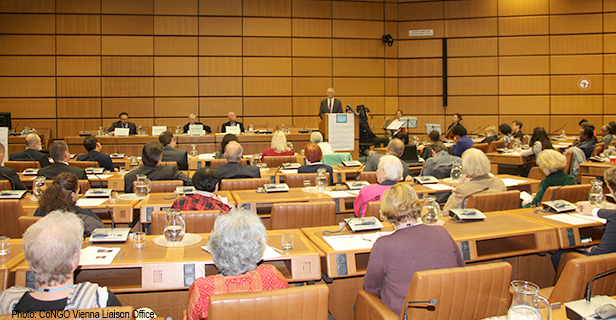 VIENNA, 5 October 2015 - Ways to strengthen the long-lasting partnership between the United Nations and civil society and redoubling efforts to meet current and future challenges were some of the topics discussed at a recent conference at the United Nations in Vienna.

Wolfgang Beiglboeck, CoNGO Vice President, welcomed the participants and pointed to the growing significance of the work carried out by the NGO community in Vienna.

As the participants took stock of the partnership between the UN and civil society, the CoNGO President Cyril Ritchie pointed out that there are examples of successful cooperation between NGOs and the UN.  He referred to the important role of civil society actors when it comes to monitoring and holding governments accountable for shortcomings.

"Civil society is also an important partner when it comes to responding to emergencies," said UNIS Vienna Director Martin Nesirky in his keynote speech, referring to the recent refugee crises and humanitarian emergencies all over the world. "Here in Austria, civil society has set a wonderful example of compassion and solidarity in helping the refugees and migrants who have arrived in recent weeks, supplementing and complementing the work of the Austrian authorities. The huge concert and rally in the centre of Vienna just this past Saturday was a moving manifestation of that," he said.

He pointed to CoNGO's important role in helping to foster and nurture dialogue and cooperation between the United Nations and civil society.

Managing Director of the Society for International Development (SID) Stefano Prato gave an overview of SID's work in supporting development and innovation at local, national and global levels, in order to contribute to solving problems of poverty, injustice, gender inequity and lack of sustainability. He highlighted SID's role in promoting dialogue, understanding and cooperation for social and economic development enhancing the well-being of all people.

The UN Secretary-General, Ban Ki-moon, has repeatedly stressed the need for an active civil society. At an event earlier this year in Ireland, he spoke of the need to work together with a functioning civil society and other partners to reach the common goals of universal peace, sustainable development and respect for human rights: "No country, no matter how powerful or resourceful, can do this work alone.  The United Nations cannot do this work alone.  All actors need to join hands as never before - governments, business, civil society."

Just as NGOs contributed to writing the UN Charter seventy years ago, so civil society has contributed to shaping the new Development Agenda. A total of 8.4 million people participated in the MYWorld survey - a global online and offline initiative that asked individuals what they thought would make the most difference to their lives.

As the post-2015 development agenda was being discussed, global thematic and regional consultations with civil society organizations and the general public took place on topics ranging from governance to education and health, which accompanied intergovernmental negotiations.

"I think we can justifiably say these new Goals belong to all of us, the people," Martin Nesirky emphasized.

The new 2030 Development Agenda is an ambitious, comprehensive, all-encompassing agenda, requiring political will and an enormous drive to make it a reality. Civil society will play an important role when it comes to implementing the new sustainable development goals from 1 January 2016.

"The eight Millennium Development Goals, adopted in 2000, aimed at slashing poverty, hunger, disease and gender inequality, and improving access to water and sanitation by the end of 2015. The new goals build on the success of the Millennium Development Goals, which helped more than 700 million people escape poverty, and go much further, addressing the root causes of poverty and the universal need for development that works for all people," Martin Nesirky stressed in his speech.

There were also statements from the chairs of the Vienna NGO Committees and a reception sponsored by the City of Vienna which provided further opportunity for discussion.