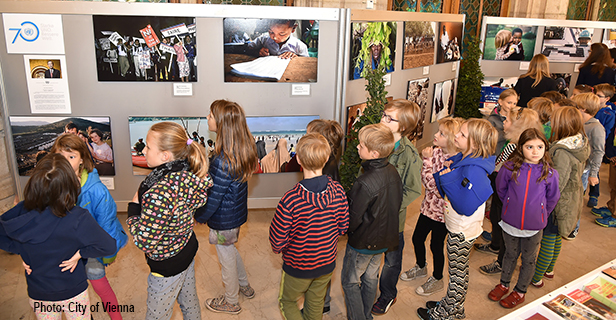 "We the peoples" exhibition on display at the Vienna City Hall

About 135 children from Viennese primary schools took part in the official opening of the "We the Peoples" photo exhibition at the Vienna City Hall on 21 September, which marked the International Day of Peace.

At the opening ceremony local councillor and Human Rights Spokesperson Muna Duzdar welcomed the guests and in particular the school children, who had come to visit the exhibition. Ms. Duzdar explained to the children that currently many people are fleeing their homes because there are wars in their countries, which is also one of the topics shown in the photos on display.

The Director of International Relations at the City of Vienna, Oskar Wawra, said he hoped the photos on display would remind everyone that there are still many people and especially children in this world, who do not live in the same comfort as we do.

Afterwards the Director of the United Nations Information Service (UNIS) Vienna, Martin Nesirky, told the children about the founding of the UN and some of its achievements during the past seven decades. He emphasized that the International Day of Peace is also a day for remembering how important it is to pull together into one direction and to help the UN to create a better world for everyone.

Following the opening the school children had a look around the exhibition, led by tour guides from the United Nations Visitors Service. After a tour through the City Hall the children sang peace songs alongside children from the Superar Choir.