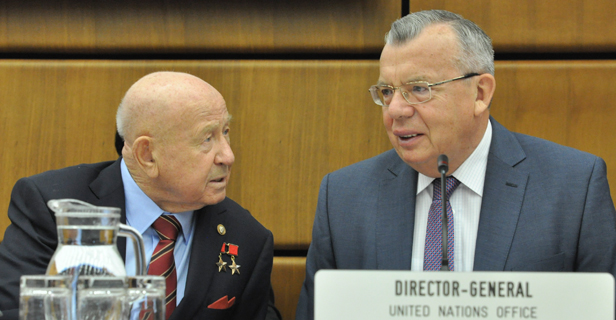 On the 50 th anniversary of the first human space walk, cosmonaut Alexey A. Leonov described the life-threatening challenges he faced on his historical mission in space half a century ago.

Speaking at the 58 th session of the Committee on the Peaceful Uses of Outer Space at the United Nations Office in Vienna, Mr Leonov vividly recalled the moment when 500 kilometres away from the Earth he emerged from his Voshkod 2 capsule and saw the Earth in perfect silence surrounded by stars. He also told delegates how surprised he was to see that our globe was indeed round.

But at the end of his 12-minute spacewalk he suddenly faced problems no one on the mission had been prepared for. His spacesuit had become deformed because of the atmospheric pressure, preventing him from returning to the capsule. The euphoria turned into anxiety as Mr Leonov decided to decrease pressure, taking the risk of suffocation.

The landing of the Voskhod 2 turned into yet another challenge as the team had to manually guide the spacecraft back to the Earth. In the end, they landed safely in the forests of Siberia, albeit thousands of kilometres away from their original destination in Kazakhstan.

Decades after this adventure, 81-year-old Mr Leonov talked about these difficulties with a smile on his face and called them an inspiration for his later paintings. His mission in 1965 had not been the first attempt to send a human on a walk into space. Mr. Leonov, an experienced cosmonaut, had already been part of project Vostok-11, which was however cancelled in spring 1964. A year later and after an 18-month training on weightlessness, the Soviet Union successfully launched the two-manned mission with Alexey Leonov and Pavel Belyayev writing a new chapter in mankind's history.

While space exploration had begun long before this mission, the most important question had always been, whether human beings would be able to walk and survive in space. Mr Leonov's spacewalk gave answers to these questions, fundamentally changing the course of outer space research. Today 108 women and men have spent hours floating in Outer Space and all of them walked in the footsteps of Alexey Leonov.

May 19, 2022
‘Lifeline’ of renewable energy can steer world out of climate crisis: UN chief
May 19, 2022
Nations must ‘act together, urgently and with solidarity’ to end crisis of food insecurity
May 19, 2022
Americas: Rising COVID-19 caseload should be a ‘wake-up call’
May 19, 2022
Global economic growth downgraded due to spillover from Ukraine war
May 17, 2022
COVID-19 Measures at the Vienna International Centre
May 12, 2022
Dialogue and cooperation needed for ‘interlinked global crises’ UN chief says in Austria
Tweet